You are here: Home / Archives for Southern Great Barrier Reef 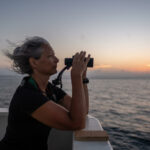 Scientists have discovered a previously unknown "impulsive sound" – dubbed the “gunshot” by researchers – that has never been recorded before. The study documented 600 whale calls over 11 days at the Vema Seamount in the Atlantic Ocean, 1,000km off the coast of South Africa. The research was conducted during a Greenpeace International expedition to the region and led by the … END_OF_DOCUMENT_TOKEN_TO_BE_REPLACED