You are here: Home / Archives for staff 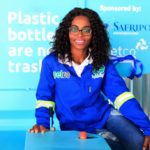 A Mpumalanga recycling project has received acclaim for improving the lives and livelihoods of Ermelo community members while making a positive difference to the environment. When Johanna Leshabane launched Bophelo Recycling in 2007 after being retrenched, little did she know that her dream of fighting unemployment in her community would evolve into an award-winning … END_OF_DOCUMENT_TOKEN_TO_BE_REPLACED