You are here: Home / Archives for storm surge 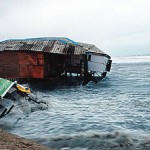 Four people, including a six-year-old girl, have been confirmed dead after the Atlantic Ocean charged into Lagos, Nigeria's Kuramo beach on Saturday. With the aid of a boat, the officials of the National Emergency Management Agency (NEMA) recovered the body of the girl, identified as Bisi Kolawole, and two adults, as they floated on the water body, on Sunday … END_OF_DOCUMENT_TOKEN_TO_BE_REPLACED