You are here: Home / Archives for tipping point 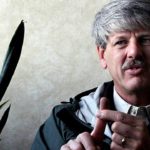 Things have gotten worse more rapidly than previously thought, says Guy McPherson, emeritus professor of conservation biology from Arizona University on his recent tour of New Zealand. "Humans are a mere blip in geological time." Here is the video of that interview for you to make up your own mind: "Temperatures over much of the Arctic will increase as much as 54 … END_OF_DOCUMENT_TOKEN_TO_BE_REPLACED