You are here: Home / Archives for Tōhoku 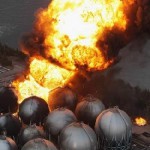 The world is still reeling from the shock of the terrible triple disasters of the 2011 Tōhoku earthquake 13 kilometers off the Oshika coastline near Sendai, the resultant tsunami and then the nuclear near-melt-down that hit Japan in the past week. What exactly happened at the Fukushima nuclear reactor, we were wondering. The Green Times attended a talk at the University of … END_OF_DOCUMENT_TOKEN_TO_BE_REPLACED