You are here: Home / Archives for tortoises 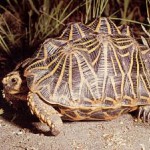 Some experts say the world is heading for the "sixth extinction." Unlike the five separate mass extinctions millions of years ago, this one will be caused not by natural events, but by a single species: humans. To highlight the biodiversity crisis, the IUCN and London Zoo published a report identifying the 100 most threatened species on the planet. Four are found in SA. … END_OF_DOCUMENT_TOKEN_TO_BE_REPLACED