You are here: Home / Archives for vote 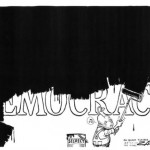 In November 2011, the National Assembly passed the Secrecy Bill, ignoring a monumental public outcry. It was a sad day for South Africa's democracy, and it became known as Black Tuesday. The battle now moves to The National Council of Provinces and President Zuma, who both must approve the Bill before it becomes law. We must keep challenging this draconian bill and taking … END_OF_DOCUMENT_TOKEN_TO_BE_REPLACED