You are here: Home / Archives for white rhino 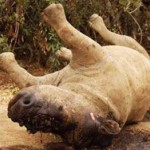 The owner of the farm where two white rhinos were poached yesterday in Brits in the North West, says he has lost eight rhino this year alone. Neels van Rensburg who had 45 rhinos says he has now decided to quit the rhino farming business and plans to auction what's left of the animals on Saturday. 'I have been farming with rhinos since 1988 but I am going to sell them all … END_OF_DOCUMENT_TOKEN_TO_BE_REPLACED