You are here: Home / Archives for wild cats 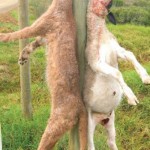 This scene of barbarism greeted the police and conservationists on Sunday morning on the road between Riversdale and Vermaaklikheid, Western Cape, South Africa. The culture that drives such actions is reprehensible and inconceivable. The caracal had been caught in a gin trap (even though these traps cannot be used without permits in the Western Cape and no permit was issued … END_OF_DOCUMENT_TOKEN_TO_BE_REPLACED