You are here: Home / Archives for Woodstock Festival 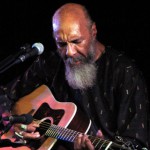 Folk icon and activist Richie Havens has died after suffering a heart attack this morning. He was 72. Havens is best known as one of the standout artists from the original Woodstock festival and film, though his career went far beyond just that career-making performance. His career spanned over four decades and included over 25 albums. He retired from full-on touring only … END_OF_DOCUMENT_TOKEN_TO_BE_REPLACED