You are here: Home / Archives for World Rhino Day 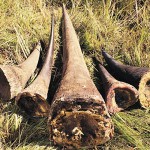 To date, a staggering 635 Rhinos have been reported as poached in South Africa in 2013, with the real numbers possibly being higher. Rhino poaching is considered by some to be a low risk - high reward activity with an increasingly affluent market for rhino horn in the east, and this is responsible for driving the numbers of Rhinos poached ever higher. To date, a staggering … END_OF_DOCUMENT_TOKEN_TO_BE_REPLACED

When will Africa embrace ecological agriculture?

As COVID-19 threatens farming communities across Africa already struggling with climate change, the continent is at a crossroads. Will its people and their governments continue trying to replicate …

The world's insect populations are plummeting everywhere we look

Crashing numbers will have serious implications for our future.

Help save our bees from ecological collapse

Billions of bees, butterflies, and beetles… are dying off, threatening ecological collapse. Toxic agricultural pesticides are among the key culprits, but we now have a unique chance to phase …