You are here: Home / Archives for Zinave National Park 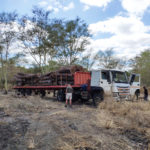 In October 2019 a successful security operation led to the arrest of several suspects involved in a large illegal logging operation in Mozambique’s Coutada 4, a hunting concession that lies on the northern border of Zinave National Park. After hearing what sounded like chainsaw operations in an area where logging is strictly prohibited and having suspicions confirmed by … END_OF_DOCUMENT_TOKEN_TO_BE_REPLACED 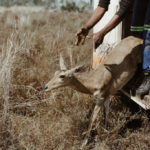 In a large translocation operation recently concluded, 388 animals were moved from Mozambique’s Gorongosa National Park to Maputo Special Reserve and Zinave National Park. Zinave received 47 reedbuck and 48 sable – the first sable to return to the park in decades. In Maputo Special Reserve 247 waterbuck and 46 oribi were added to the reserve’s wildlife family. There had not … END_OF_DOCUMENT_TOKEN_TO_BE_REPLACED