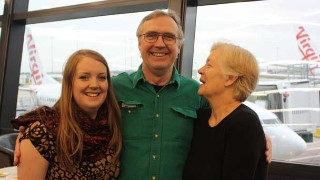 After a long journey, alongside his wife Chrissie and daughter Maddie, Colin Russell finally made it onto home soil at 10.55pm on Thursday 2 January 2013.

Russian authorities arrested and detained the 30 crew members of Greenpeace vessel the Arctic Sunrise for 100 days for participating in a peaceful protest. On 10 September 2013 armed commandos boarded and seized the Arctic Sunrise in international waters for attempting to attach a banner to an Arctic oil platform operated by Gazprom.

The Arctic 30 have finally returned home after they were granted amnesty by the Duma (Russian parliament) following a global campaign to free them.

A huge thank you!

Colin and his family offered their heartfelt thanks to the Australian public and the international Greenpeace community for all their support during this extraordinary ordeal. Thousands of people across the world rallied together to speak out against the detention of the Arctic 30.

“I’d really like to thank Australia for backing me, looking after my family, mowing my lawns, walking my dog,” Colin explained.

On 16 November 2013, thousands of people took part at events in 265 cities in 43 countries, for a day of solidarity to mark two months since the Arctic 30 were detained by Russian authorities. The global Greenpeace community joined together to speak out against oil drilling exploration within Arctic waters and the detention of the Arctic 30.

The future for Colin

Upon returning home Colin plans to spend some private time with his family and adjusting to life at home before returning to defending the environment with his work at Greenpeace.

Colin stated: “I’ve been doing it for 14 years, so I’m not going to stop what I know best. No regrets… I’m trying to give a future to our kids and our grandkids. We all need to stand together for that.”

“It’s going to be an oil rush in the Arctic, I think it’s crazy, the known reserves we have now are enough to throw us over two degrees.”

Colin will also have to undergo medical tests for several years after potentially being exposed to tuberculous while being held within the Russian jail.

The future for the Arctic Sunrise

“I feel it is not over till the Arctic Sunrise is also released.”

Its future at this stage remains uncertain. The Arctic Sunrise, along with many of the crew’s personal belongings, remains moored in Murmansk and has not yet been released by Russian authorities.

Greenpeace International is calling on the Investigative Committee to facilitate the return of the ship along with the personal belongings of the Arctic 30 now that the criminal prosecution against the Arctic 30 has been terminated.

The future for the Arctic

While being home is a relief for the Greenpeace activists, this is not the end of the battle to save the Arctic.

The Arctic affects every person on this planet. It acts as the Earth’s heart, regulating our climate and circulating the ocean currents. Polar bears, walruses and narwhals are struggling to survive as it melts.

Environmental scientists are predicting the first ice-free Arctic summer by 2016.

Together we will call on governments and the United Nations to turn the Arctic into a global sanctuary.

We have succeeded before. 30 years ago, Greenpeace led a movement to protect Antarctica. Today it remains a global sanctuary; a haven for scientific research and off-limits to exploitation.