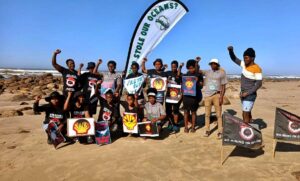 Following President Ramaphosa’s Youth Day speech last week – which mostly focused on the unprecedented high unemployment rate and lack of opportunities – young small-scale fishers, along the coast, say they are concerned that government does not recognise their value as South Africans who are self-employed and trying to create sustainable livelihoods for themselves and their communities, from the ocean.

According to The Green Connection’s Community Outreach Coordinator Neville van Rooy, “On the one hand, the President says that young people need entrepreneurship and employment opportunities. Yet, at the same time, he stands silently by as the Department of Mineral Resources and Energy (DMRE) continues to push offshore oil and gas exploration activities, which not only exacerbates global warming and climate change but threatens the health of the ocean and, as such, coastal livelihoods.”

“For young small-scale fishers, the ocean provides a sense of self-worth and purpose. They feel part of something bigger. However, in the two years since we started working with coastal communities, as part of the Who Stole Our Oceans campaign, we have found that government and corporate entities want to do their own thing, without interference from affected communities. In the process, they often end up ignoring already established livelihoods and customary rights. These exclusionary tactics contradict what the President says about our young people creating their own opportunities and turns his otherwise lovely sentiment into nothing more than hot air.”

The Green Connection’s Legacy Programme is specifically geared to empowering coastal communities, especially young people, to stand up for their right to protect the ocean and their livelihoods.

Small-scale fisher Natalie-Jane van Wyk, a young woman from Saldanha Bay West Coast and a graduate of The Green Connection’s Legacy Programme says, “Coastal communities have been taking initiative for generations, but we do not get the support we need to develop our ideas. And now, with coastal communities facing an onslaught of offshore oil and gas exploration proposals, which threaten our small businesses, we hope President Ramaphosa will do more to protect our right to meaningful public participation processes.”

She says, “It makes little sense for the President to emphasize the issue of widespread unemployment and the need for young people to take initiative, but at the same time it is his government trying to destroy our ability to work. With a healthy ocean, the truth is that we are often better off than many of the unemployed, struggling graduates. Because we can fish, we can feed our families and make an income. We cannot stand by and watch the government destroy that.”

“In order to drive economic development and job creation, there must be a collaboration and synergy between government, the people and the private sector. The people’s involvement is critical, and we should not be bullied into accepting government’s proposals, which often seems to be the case. It is because government does not want to include the people that there is a major disconnect between government and its youth,” says van Wyk.

Small-scale fisher from Sicambeni Port St Johns in Eastern Cape Sifiso Stanly Ntsunguzi says, “As small-scale fishers, we see our youth being left behind because government is more focused on meeting the needs of business, instead of looking out for the people. Government did not include us in developing its plan for the Oceans Economy, which obviously should include small-scale fishers who depend on oceans. Instead, they only want to deal with traditional leaders, who have no right to, but end up taking decisions on our behalf. It cannot be that the decision-makers are the only ones who benefit from the decisions taken. I am no longer a youth…many opportunities were missed.

Ntsunguzi says, “The situation seems hopeless for our youth, with many turning to drugs, due to the lack of employment opportunities. Small-scale fishing gives our young people on the coast a way to support their families, with dignity. This is why we fight to protect our ocean from offshore oil and gas exploration, which will have detrimental impacts. The evidence from many parts of the world, is that oil and gas has not brought growth nor development, but instead it damages the environment and takes away opportunities. Just look what has happened to the Niger Delta. Small-scale fishers and marine ecosystems are severely impacted.”

He says, “We must protect the environment for ourselves and our future generations, especially because it seems that government does not care about nature and the environment, nor is it doing nearly enough to address the climate crises. We must be consulted regarding developments happening in our areas. No decisions should be taken on our behalf. The voices of the youth must be heard.”

According to Geralt Cloete, a young indigenous Nama Khoi from Sandrift Northern Cape, “Youth unemployment is at its highest since 1994 and continues to grow. Based on this track-record (over the past 28 years) it is clear that our country’s decision-makers are missing the mark. This exposes the serious disconnect between government and the people, especially the youth. The President talks about the youth not taking up the opportunities provided, but if government keeps doing its own thing, without input from the people, they will keep making the same mistakes by creating ‘opportunities’ that the people do not want or need. The government must listen to its people, to better understand what is working on the ground and where we need support.”

Cloete says, “The Northern Cape is a province that has seen much abuse from mining companies, without government holding them accountable. We want this to stop. We will not stand by as the government risks the little we do have, so that a few elites can get even more rich. By risking our ocean, you risk our heritage, our livelihoods, and our future.”

According to The Green Connection, government must be more self-reflective and honest about how its interventions are faring. In the face of the increasing unemployment rate, which will likely only get worse as the climate crises escalates, the urgent need for structural reform is clear. What government has done, up to now, seemingly only relying on its own limited knowledge, is not working.