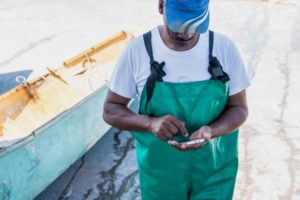 Despite the widespread availability of Norwegian salmon in our restaurants, this fish gets imported in large quantities with a significant carbon footprint and increasing concerns about the farming practices and demands on the natural environment in the country of origin.

Seafood has risen on the news agenda of late with the release of Netflix documentary, Seaspiracy. The documentary sets out to identify the major culprits responsible for the devastation of marine resources globally and ends with a call to stop eating seafood as a possible solution.

Whilst many South Africans might be re-thinking their next Sushi order, social enterprise ABALOBI says that eliminating seafood from our menus is not a viable option, nor the solution.

Dr Serge Raemaekers from ABALOBI says that it makes far more sense to celebrate the many small-scale fishers along our own coastline as stewards of our oceans.

“Through low-impact fishing methods, these fishermen and women are able to provide us with a diverse basket of what the sea has to offer on any particular day, and can focus on less exploited species, as opposed to serving the unabated consumer demand for a handful of convenient and trendy seafood products,” says Raemaekers.

What began as a university research project in 2015 has grown into a UNESCO-awarded global social enterprise on a mission to drive social and environmental change in small-scale fishing communities in Africa and beyond. ABALOBI, which means fisher in isiXhosa, is a non-profit who has developed a suite of apps that connects small scale fishers directly with consumers, ensuring a fair, transparent income for the fisher, and fully traceable, premium seafood for the concerned consumer. 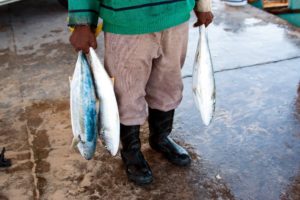 Raemaekers says that the ABALOBI platform offers fishers who work together as a group to sell their catch to buyers directly, without necessarily the need for middle persons in the supply chain.

“All of the ABALOBI apps were co-developed and tested by the small-scale fishing communities and include features that foster transparency and accountability across the entire value chain,” says Raemaekers. “Through the app, fishers can better check weather conditions and more accurately plan their trips, log their catch, do their own financial reports and finally sell their catch, locally or in cities.”

For consumers, the ABALOBI marketplace app is a virtual ‘window’ into the various fishing communities. The availability of the Catch of the Day is entirely dependent on prevailing weather and fishing conditions and can include anything from Bream to Yellowtail, Snoek to Jacopever, Red Roman to Gurnard. In addition, seafood-related pantry products from the various communities are also available on the app including delicacies like sea-lettuce salt, rollmops and bokkom biltong. 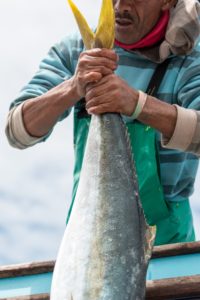 Fresh Catch of the Day is typically available three times per week and is announced via the app and push notifications. Orders are on a first-come-first-serve basis, available in the Western Cape to a range of buyers, and in Johannesburg to restaurants, for now.

On delivery, consumers can ascertain the source of their seafood through a QR code that accompanies each fish. By scanning the QR code they have access to who the fisher was, where the fish was caught and when, as well as full pricing transparency including the exact portion of the purchase that ended up in the fisher’s pocket, which is generally around 80%. Hence the consumer is not just buying fish via ABALOBI, but ‘Fish with a Story’.

Serge says that consumers need to play a more considered role in the fight to preserve the health of our ocean and seafood stocks and he believes that coastal communities and their small-scale fisheries are instrumental in this movement.

“As with many other sectors in food production, being more mindful of the way in which you purchase and consume seafood means that you’re doing your part to support local food systems.”