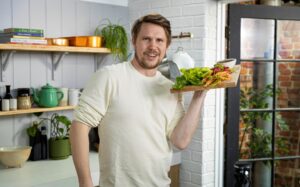 Top South African and international chefs and food personalities will be taking to the stage when The Plant Powered Show comes to the Cape Town International Convention Centre from 27 – 29 May.

The Plant Powered Show will incorporate a three-day live and in-person event as well as an online platform to allow visitors from other provinces and around the globe to attend. The inaugural show (under the name The Festive Vegan & Plant Powered Show) took place online in 2020 due to Covid lockdown restrictions and featured an extraordinary line-up of local and international chefs and was a huge success.

Melbourne-based Toohey is delighted to be back online again this year and reveals what he has been up to since he last participated: “We recently finished filming our second season of Freshly Picked, the first and only fully vegan cooking show in Australia, which sadly hasn’t reached South Africa but is being shown in many other African countries. I am now preparing for a third season which is really exciting. I am also working on my first cook book and looking at the different ways plants can be cooked and changing the way plant-based eaters can try new things. I find so often it is the same thing over and over again, so I want people who eat meat to taste this food and think ‘I could eat this every day without a thought in the world that there is no meat in it’.” 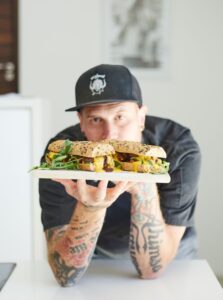 Jason McNamara, owner of The Kind Kitchen in Woodstock, says about his involvement: “The past two years have been a time of reflection for all of us globally. Eating healthy and well- balanced meals is imperative to maintain peace of mind. This is even more important in times of turmoil as most of us have experienced. Making healthy lifestyle choices for oneself and one’s family should be top of the list as we navigate this new world order. Being part of this forward thinking event gives chefs like me the opportunity to share knowledge and serve you and yours.”

Mira Weiner, whose food philosophy is centred around seasonal eating using whole foods and local produce, adds: “I am a firm believer that food is medicine and medicine is food. Food has been the catalyst in my own personal healing journey and my recipes are centred around fuelling wellness and not contributing to illness.”

Plant Powered Show Organiser Heidi Warricker sums it up: “One of the biggest trends worldwide is sustainability and food awareness and this is where the Plant Powered Show is bang on target. People are becoming more aware of what they are eating, where it comes from as well as the effects on the environment. Chefs are starting to source better produce and are using local, free-range and smaller producers.”

Arabella is a plant-based chef, certified health coach and food activist. Trained in classical French cuisine paired with a deep curiosity of Eastern systems of healing (Ayurveda), Parkinson highlights the importance of plant-based food systems. Her food explore the convergence of pleasure and mindfulness; science and creativity. Dedicated to experimenting with gastronomy through a sustainable development lens she explores the relationship between culinary expression and sustainable food systems. 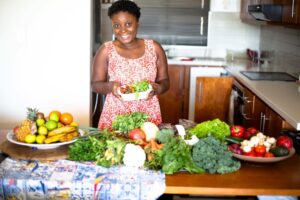 Jane is a plant-based African food educator and founder of Tamu by Jane. She has a desire to nourish stomachs, souls and minds and her recipes and food philosophies intertwine to deliver knowledge about food security, community and a passion for African foodways. Nshuti has overcome great adversity to make a positive impact by helping families eat healthier meals while embracing their African heritage.

Claire is a classically trained Cordon Bleu Chef, nutrition and functional foods expert, wellness innovator and founder of the internationally acclaimed Claire Sharryn Roberto Consultancy. She and her team offer elevated food, recipes, and plant-based wisdom to restaurants, chefs and aspiring culinary alchemists globally, through restaurant and hospitality consulting, online and live culinary courses, bespoke retreats in Europe, South East Asia and Africa, as well as a product line of adaptogenic and supershroom functional blends, called Alchemize. She brings a healing, plant-based lifestyle and service to the market through her way of life as well as through her work. Everything she creates is based on more than 20 years of experience and expertise in the culinary world, Ayurveda, auto-immune healing, and integrative wellness. Not only does Claire prioritise health and wellness in every aspect of her brand, but she also creates everything into an art piece based on her premise of “we eat with our eyes first.”

Jason gained his skills in vegan culinary arts at the Natural Epicurean Academy of Culinary Arts in Austin, Texas under the tutelage of Chef Inge Bothma. When he returned to Cape Town he opened The Kind Kitchen, a vegan comfort food café based in Woodstock.. 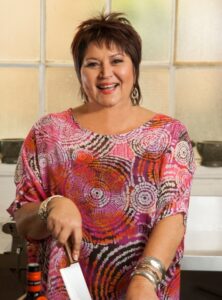 Jenny, who everyone knows as the Giggling Gourmet, is one of SA’s most-loved food personalities. She is an author, magazine writer, radio and TV presenter, celebrity chef, teacher, caterer, restaurateur and culinary tour guide who has had an ongoing love affair with food since she was a child. Not only has she conquered radio but Jenny has made several television appearances both locally and internationally. Her first show for the Food Network was Jenny Morris Cooks Morocco and her most recent was From the Heart with Jenny Morris.

Parusha is a dabbler of sorts, having worked in magazines and advertising, in editorial and design. She is currently a food-related illustrator and storyteller. Born in Durban, she calls herself Afro-Asian and focuses on food and stories from Africa and Asia. She has a degree in media studies and gender studies and spent 12 years in Europe, first London, then Berlin, where she started a vegan pop up dinner club doing events there and in other European cities. She published a digital illustrated cookbook in December 2021 sharing all her tips on going plant-based (which she has been for 10 years) along with her favourite African and Asian recipes. 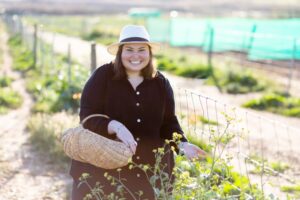 Mira is an entrepreneur, marketing consultant, plant-based advocate and creative cook. She is passionate about conscious living, sustainability and holistic healing. Weiner was born into a family of creatives in the food and fashion industry. Her love for food started from a young age where she regularly cooked for family and friends. Her food is nutritious and nourishing while being free from refined sugars, toxic oils, preservatives, artificial colourants and genetically modified ingredients. She loves recreating her favourite recipes that heal instead of hurt and she is an intuitive cook hoping to inspire people to cook creatively, measure with their soul and eat more plants! She currently lives in McGregor.

Phil is a chef specialising in the cooking and promotion of kelp as a sustainable and nutritious food source. His knowledge of food comes from his background as a trained chef who started at the Mount Nelson Hotel before doing a three-year diploma at Silwood School of Cookery. His interest in kelp was first piqued in 2015 when cooking at the Cape restaurant Farmhouse, when he was asked to do a kelp lasagne by local foraging enthusiast Roushanna Grey for a large group of people. Mansergh can also be found demonstrating the preparation and cooking methods of fresh and dried kelp at the recently opened Kelpshack in Kommetjie (by appointment only).

Simon is an Australian chef who rose to fame after appearing in the hit TV series MasterChef Australia in which he wowed fans with his vegan creations and use of seasonal vegetables. He first participated in the cooking show in 2019 and was placed third and returned in 2020 to become a grand finalist. Toohey has launched the Sustainable Earth Network, fronted two seasons of a television show and is working on his first cookbook. 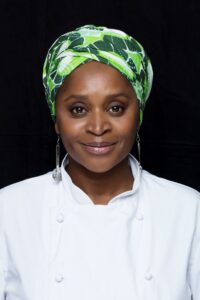 Mokgadi has worked in the food industry for more than 20 years. A former food editor for True Love and Destiny, she is a food activist chef, working with The Chef’s Manifesto, a global movement of chefs championing the United Nations’ sustainable goals. Her plant-based dining experience The Plate with Chef Mokgadi, based on the “planetary health plate” from the Eat Lancet Report, is a platform to educate and move her community towards a more plant-based, earth- friendly and sustainable food system. Her debut cookbook Veggielicious, a plant-based ode to the garden was launched in September 2021. She is the recipient of the FOODXX Woman in Food 2020 Award for Future Food.

Daughter of the iconic South African chef Lannice Snyman, Tamsin trained in promotions, marketing and business communication before joining her mother’s publishing company. Snyman has worked as a food stylist and is a culinary consultant revamping and designing restaurant menus, training and upskilling chefs and implementing operating systems. She has authored and self-published her own cookbooks, appeared on MasterChef Ireland and Ultimate Braai Master in South Africa. She works for the World’s 50 Best Restaurant Awards as Academy Chair for the region South & East Africa. In 2020 Snyman launched Plant-Based Creative which has developed a range of vegan foods and offers a consulting service to families to assist them transition creatively to a more plant-based lifestyle.