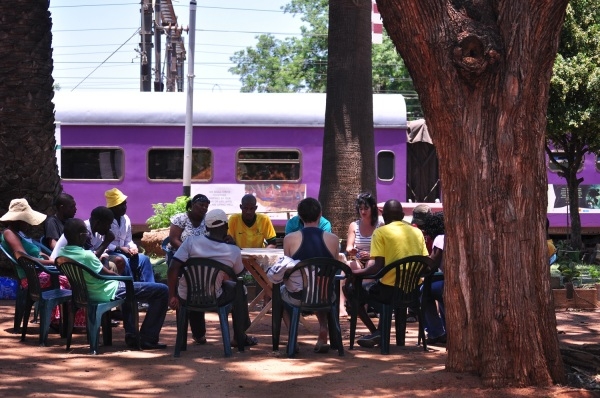 Sheltered from the fierce heat of the Namboomspruit sun, 16 Mokopane community members gathered for an Earth Forum in the cool shadows of an oasis of tall palm trees.

These participants formed part of a community action group called Jubilee, which aims to address critical incidences of environmental injustice, particularly around the effect of mining on human and environmental well-being.

The group was seated in a perfect circle, each holding a cupped hand of ochre tinted soil from the area. They were surrounding the Earth Forum’s primary instrument: an oiled cloth placed on a round wooden table. This was where handfuls of soil had been placed from each town where Dylan McGarry conducted connective practices to encourage ecological citizenship. McGarry is a doctoral researcher at the Environmental Learning Research Centre at Rhodes University, and a COPART cultural practitioner on the Climate Train.

The group started a calm contemplation by exploring their imaginations and memories and actively listening to each other’s reflections and hopes for the earth. Testimonials arose seamlessly from the gathering. 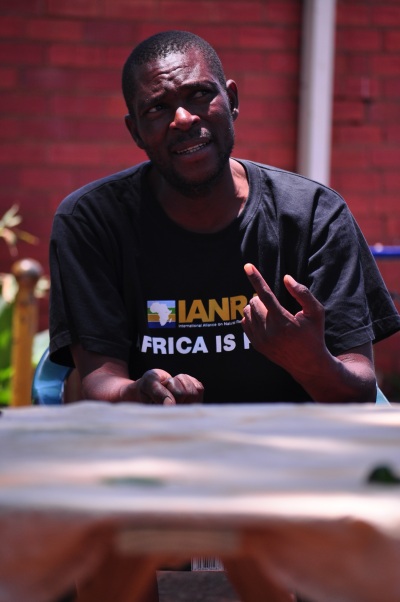 Benefit for one should benefit all

“I don’t want a luxurious life. I just want to be able to play with my children without worrying about toxic water and noisy operations in the background,” said Joseph Matlangwe, a resident at Mokopane. When asked to reflect on what it takes to live well as opposed to living rich, he responded: “A benefit for one should be a benefit for all. I hope for a safe environment where people are not exploiting our land with quick get rich schemes.” Audrey Molokomme confessed that living well for her is a life without restrictions and fresh food to eat from the ground.

The group listened carefully to the substance gathering in the forum, as each handful of earth was placed on the round table. It became increasingly clear that the effects of platinum mining in their neighbourhoods was inhibiting the simple expression of each person’s idea of living well, and was fundamentally jeopardising their health and ability to live safely.

Another group member said: “Mining companies should go mine where they come from and stop destroying our land with all sorts of pollution. We want a healthy environment again. Because of industrialisation in our land we are being deprived of our right to a healthier and better life.” 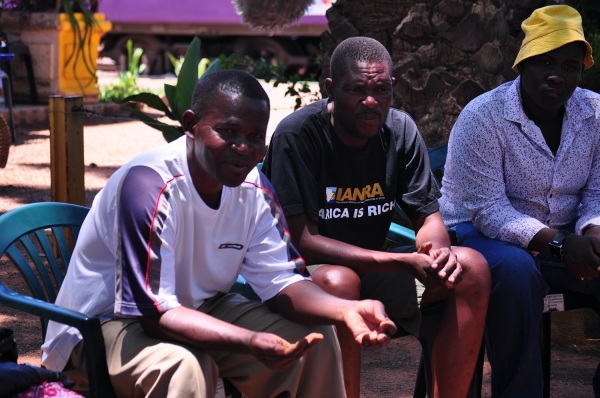 Land for ploughing was taken away

According to Phillipos Dolo, co-ordinator of Jubilee, the mining has deprived these people of access to land.

“In rural areas we depend on the land for ploughing. The mining companies took all the land we worked on without any compensation.”

He added that due to the lack of employment in the area sex work and HIV/AIDS has become increasingly prevalent in the community. The companies have been mining for 16 years, yet it is only now that the people in the area are awakening to the aftermath of unsustainable mining enterprises. Mr Dolo highlighted the consequences of toxic sulphur nitrates, which carry severe health risks to the people living near the mines.

As the forum drew to a close Lesiba Lamola shared.

“There is no real platform for us to share and engage. We are always in the dark, and the government makes plans before they even consult us. The government should take us more seriously so that a better life can start because right now, there is nothing happening. We are not being properly consulted. Everything is done above our heads as though we don’t exist. We hear things on TV, but yet we are the ones who are directly affected. They are making money at our expense.” Transformation starts with a dream

In response to these emergent tensions McGarry concluded:

“Creating a new space for something to emerge and expanding our capacities to listen is a valuable start, not only for your community, but also for how you engage government or the mining industry. I hope that this process has seeded  something small in each of us. Any great movement or transformation starts with a dream. As citizens we need to fight together and create these spaces to share and have real conversations with politicians and decision makers on our own terms. There needs to be an attitude of active citizenship, as these are fundamental violations of human rights.”

After the forum, McGarry established a working plan with the group to carefully work with the People’s Charter for Africa, which is a draft, complementary charter to the Universal Declaration of Rights for Mother Earth. What happens next is dependent on how the people of Mokopane are able to negotiate meaningful change within the mining industry and how government deals with human rights violations caused by unsustainable mineral economies.