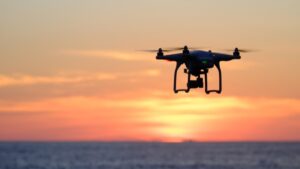 The WILDTRUST, along with several other conservation driven entities, fully support the recently published notice of the Department of Forestry, Fisheries, and the Environment (DFFE) which makes it clear that the use of drones (also known as Unmanned Aerial Vehicles – UAVs) for the purposes of recreational fishing, is illegal.

The largely negative reaction of the recreational drone fishing community to this notice has been surprising considering drone fishing has always been illegal, although arguably not always effectively enforced.

“Drone fishing” is using a drone to take bait out and deposit it in a body of water, with the aim of catching fish. Its greatest benefit is that anyone can put bait far out at sea with great accuracy – sometimes even dropping the bait right in front of a fish.

A key concern around drone fishing is the inability of drone operators to successfully land their catch and it is our understanding that a large proportion of hooked fish (via drones) are lost. Lost drone fishing tackle leaves (mostly large) sharks and rays with embedded hooks and strong fishing line trailing behind them – a danger to other marine life as well. Furthermore, the extended distances and time it takes fishermen to land large sharks, causes the animal to become exhausted and survival rates even if released back into the water, are low.

“The Department placing a spotlight on the fact that drone fishing is illegal (and always has been) couldn’t have come at a better time considering the latest IUCN Red List Assessment report confirming 42% of chondrichthyan species – sharks, rays, skates and chimaeras, occurring within South African waters are threatened (Vulnerable, Endangered or Critically Endangered),” said Marine Scientist at the WILDTRUST, Dr Jennifer Olbers.

“Of these, 12% are endemic to southern Africa, while 15% are Near Threatened. Furthermore, two of the 29 species which are listed as endangered are South African endemics, only found in our waters.”

A recent study outlined that South African drone catch was dominated by large elasmobranchs (97%) including the dusky shark (23%), bronze whaler shark (19%) and butterfly ray (13%). The study also highlights that “in particular, the capture of Endangered dusky sharks, and Critically Endangered whitespotted wedgefish, which together comprised 35% of the drone catch in South Africa is most concerning.”

South Africa is a global hotspot for shark and ray diversity, harbouring almost 200 species, one-fifth of the global fauna with high species endemism, in particular for smaller restricted-range species on the south and east coasts. Furthermore, many wider-ranging threatened sharks and rays, such as the Critically Endangered hammerhead shark and wedgefish, spend a significant portion of time in South African waters utilising essential habitats.

Sharks and rays are slow-growing, late to mature, and depend on critical and essential habitats for various life-history stages, which means they are extremely vulnerable to pressure from fishing and habitat destruction. One of the most effective measures to conserve shark and ray populations is within highly protected areas, especially no-take sanctuary areas.

Although only a relatively small portion (5.4%) of the oceans within South Africa’s mainland Exclusive Economic Zone falls within Marine Protected Areas (MPAs) there is certainly momentum and energy building to expand the MPA footprint, rezone some of the existing MPAs and explore the use of Other Effective Area Based Conservation Measures (OECMs).

Unfortunately, effective management and enforcement linked to ocean protection in South Africa is lacking but there are strides being taken to adjust regulations and improve enforcement and compliance on the ground.

“WILDTRUST are in the process of developing a conservation plan for sharks and rays,” said Olbers. “This will include identifying priority areas for the species, such as aggregation and breeding sites, nursery and feeding grounds, which – if protected – will see at least 19 threatened shark and ray species in South African waters a little safer. Securing this spatial protection will be coupled with legal and technical support, key stakeholder and public consultation engagement support and implementation process support for these sanctuary areas.”

“Drone fishing is not the only threat to sharks and rays and is definitely not the biggest – but when one takes into account their threatened status as a species, and considering they are key to maintaining the balance of the ocean – we need to start crossing threats off their list one by one,” concluded Olbers.