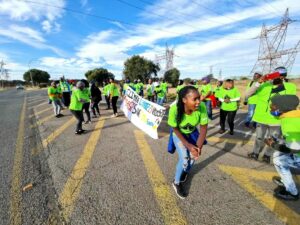 The protest follows AMSA’s annual shareholders meeting held on 19 May 2022, where community groups were refused permission to protest at the time of the AGM due to the two-week long AMSA worker strike led by the National Union of Metal Workers of South Africa (NUMSA) over inadequate wages.

Despite AMSA’s revenue being two-thirds higher than in 2020, it reduced its environmental spend from R151-million to R64-million in the last financial year. This is a worrying trend given AMSA’s history of pollution and environmental non-compliance.

Shareholder activists from the Vaal Environmental Justice Alliance (VEJA), groundWork (gW) and the Centre for Environmental Rights (CER) attended the AGM to ask questions related to AMSA’s ongoing environmental non-compliance, including soil and water contamination as well as air pollution; lack of meaningful community engagement; and its insufficient and opaque climate commitments. The AGM was held on a virtual platform and shareholders were limited to asking written questions with no opportunity for follow up on the vague and dismissive answers provided by the outgoing chairman of the board, Mpho Makwana.

Even though AMSA made commitments in its Environmental Social Governance (ESG) report to reduce greenhouse gas emissions by 25% by 2030, the company failed to show how it plans to achieve this and explain why it is unable to deploy cleaner technologies such as green steel at the pace and scale enough to reduce carbon emissions and climate risk. AMSA has failed to align with its holding company in Luxembourg, the ArcelorMittal Group, by failing to comply with a number of environmental standards and has continuously postponed compliance with minimum emission standards for air pollution.

AMSA remains South Africa’s third worst greenhouse gas emitter responsible for 3% of the country’s emissions. The steelmaker has a long history of toxic air pollution, land and water contamination and a dismal record of engagement with communities and workers affected by the company’s violations. In a landmark judgment handed down in November 2014, the Supreme Court of Appeal ordered AMSA to release environmental records to VEJA, and to pay VEJA’s legal costs.

Activists argue that AMSA has refused to engage meaningfully with communities and has not made any attempts to rehabilitate its unacceptable underground water pollution and waste disposal sites. To date there is little transparency on air quality and water quality including borehole monitoring, and a much needed environmental stakeholder forum with quarterly environmental compliance reporting is still lacking.