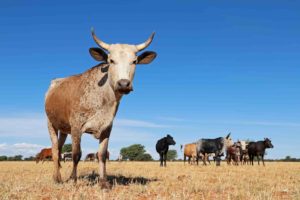 My journey in activism started about four years ago, after my family was severely affected by the water crisis that hit the Western Cape. I saw first-hand how the drought was affecting small-scale farmers, including my mother, who rely on rain to grow crops and feed cattle. When you see your cows dying, you see money going down the drain.

I conducted research on the internet and found that what we were experiencing was linked to climate change. As a black teenager in South Africa, I asked myself, “What is climate change? Where is it coming from?”

I learnt that global warming is real, and we might be facing extinction if we don’t change the way we live. I then experienced climate-related anxiety and depression, wondering why nobody else was responding to the crisis. It was very frustrating for me, but I realised that it was up to me to take that first step.

I joined Project 90 by 2030, which is an environmental organisation that strives for a low-carbon economy by 2030. This is where I learnt more about climate change and global warming, and the solutions to these problems, like solar and wind energy. Through my activism, I participated in community activities, spoke on the radio, and got people to care more about climate change. Many people of colour – the people most affected by climate change – are the ones who either don’t know about it or have other priorities.

I then joined the African Climate Alliance, a youth-led group focused on climate, ecological and social justice in South Africa. I protested as part of the #FridaysforFuture movement where youth around the world protest against climate injustices. Through that, I became part of the UN Committee on the Rights of the Child complaint – the children of the world essentially “taking the world to court” for not respecting our rights.

I then went to the World Economic Forum, which gave me a real sense of how the world operates. I stood in front of the people directly contributing to climate change, but I knew that just because I was speaking to them didn’t mean that they would act, or even listen. This is demotivating for a young person, but we are in a revolution – so much change is happening all over the world, which gives me strength. I can represent other children and show them it is safe for them to be active in these spaces. I can definitely say I have fulfilled my purpose as a young person.

I don’t like it when previous generations say the future is in good hands and the youth will come up with solutions – why are they giving us the responsibility for fixing something we didn’t break? Why not say, “We have the experience to go forward and make sure that your future is okay.”

The weight of this crisis is being shifted onto the youth. Youth are disproportionately affected, along with people of colour and poorer communities. During the drought in Cape Town, children were unable to go to school, or sent home early from classes, because there was no water. This is affecting our everyday lives and we are expected to just be resilient and “stick it out.”

There are a lot of opportunities in the green economy for young unemployed people in South Africa. There is a lot of investment in this area. This is also an area of opportunity for business. Aside from working to reduce their carbon footprints, businesses should make an effort to educate their employees and clients, raise awareness about climate change, and provide resources and support to young people. It’s easy to share information in the digital age – show young people that you are willing to listen and give their ideas a chance.

What I would like to say to young black children in South Africa is this: I know that we are facing a lot of socioeconomic injustices, like poverty, gender-based violence, xenophobia, migration and so on, but it’s important for us to stand up, stand together and acknowledge that the crisis we are facing right now cannot be dealt with alone. We have to understand the intersectionality of these crises and come together to raise more awareness and hold those in the wrong accountable.

The current issue we are facing in South Africa is not solely because of the arrest of former president Jacob Zuma. The looting and destruction of property is a direct reflection of the failing, unequal and corrupt system we have been living in for decades. It highlights how poorly the government has been treating its own people and it is showing us that it is time for a big change. Going back to how things were is not a solution.

We are in a revolution, and change is coming whether you like it or not. It’s up to you, as a young person, to decide whether you are going to stand with other young people who are driving change, or are going to be complacent, telling yourself that someone else will deal with the mess. In the past, we have seen how powerful young people can be – especially here in South Africa, with the Soweto uprising – and I truly believe that if young people stand together and really bring about social change, we will conquer and live in a fruitful, lower-carbon society that is still full of resources, and we will be able to thrive. 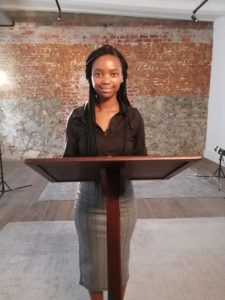 This article draws on her keynote address at the Trialogue Business in Society Conference 2021.