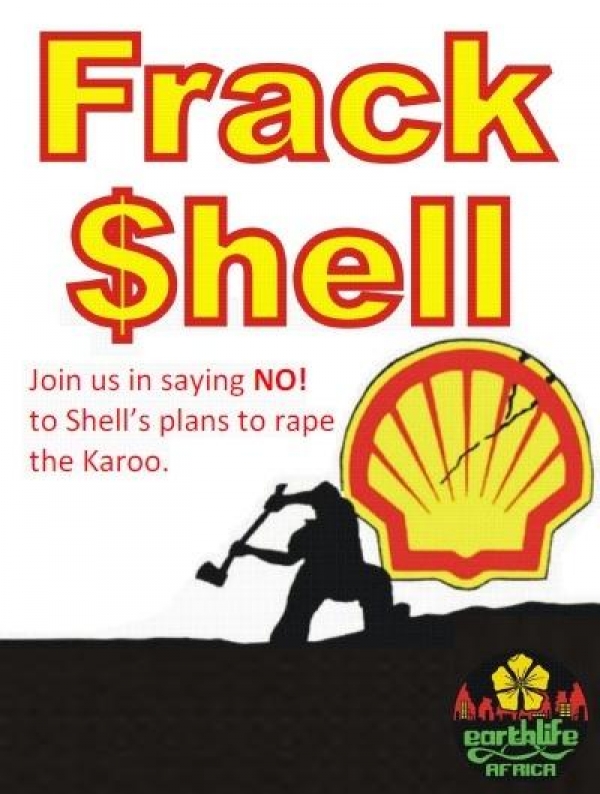 Earthlife Africa and anti-fracking activists are calling for a national boycott off Shell. This countrywide boycott will start on Tuesday, 17 May and last until the Government bans all fracking or Shell withdraws its application to frack for shale gas in the Karoo. This urgent and important action will start from 17 May 2011 and continue until the danger of fracking in this country is halted.

Plans by oil companies to explore for fossil gas in large parts of the Karoo have begun a firestorm of protest, which is now escalating into a call for a total boycott of Shell.

Tens of thousands of square kilometres of the ecologically fragile, water-scarce Karoo are under threat from being devastated by a dirty, water- and energy intensive gas exploration technique called hydraulic fracturing or fracking. Several oil and gas companies, most prominently Royal Dutch Shell, are in the process of exploring this unique and beautiful region of South Africa for underground layers of so-called gas shale.

If they are successful, we can soon expect to see thousands of gas drilling rigs dotting the pristine Karoo landscape with potentially devastating social, economic and environmental impacts on our people and their livelihoods.

37th driest country in the world

As the 37th driest country in the world, with the Karoo being the driest part of the country, this threat is magnified locally, especially given that as much as 20 million litres per well at a time are used, after being mixed with a toxic cocktail of chemicals.

Earthlife Africa is calling for a nationwide boycott of all Shell service stations and all Shell products, from Tuesday 17th May, which coincides with Royal Dutch Shell’s AGM in the Netherlands, and is also, co-incidentally, the United Nations World Information Society Day – to show their displeasure at plans to ‘frack’ large parts of our country.

‘We ask people to go to their nearest Shell garage, NOT fill up, but ask to speak to the manager and say that they have nothing against the manager personally, but the company is carrying out plans that have potentially horrendous impacts on people and especially scarce water in our country,’ said Andreas Spath, Earthlife’s Anti-fracking co-ordinator.

Shell, the South African government and the natural gas industry portray shale gas as a climate-friendly, low-carbon energy source. In reality, however, preliminary studies have shown that if the entire carbon footprint, including methane (a much more potent greenhouse gas than CO2) escaping from fracking wells in substantial quantities, is taken into account, natural gas from this source contributes to climate change in a magnitude similar to oil and coal.

“Shell’s record in Africa should be cause for alarm,” said the Reverend Barry Wuganaale, of the Ogoni Solidarity Forum. “Not only for widespread and continuing environmental harm, but they have also acknowledged being complicit in the murder of activists opposing them in Nigeria. They cannot be trusted.”

“The relevance of World Information Society Day is clear, given the disinformation and misinformation spread by Shell through their adverts, and flyers that avoid mentioning impacts being handed out at their garages,” said Earthlife Branch Co-ordinator, Muna Lakhani. “The most recent and shocking scientific international reports, confirm that high levels of methane are found in drinking water at locations close to fracking operations, and in some cases, enough to set tap water alight!”

The organisation is calling upon Government to extend the recently announced moratorium on fracking to a permanent ban, and for Shell to end all fracking and related activities immediately.