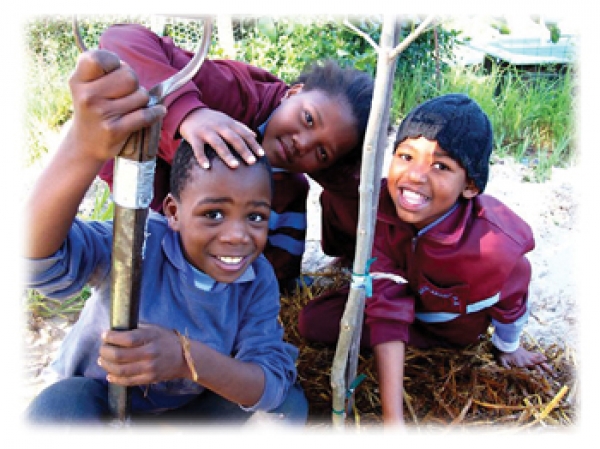 The EarthChild Project in Cape Town was conceived while Janna was living in an eco-village in Brazil and reading the spiritual classic Autobiography of a Yogi.

“The book describes the educational ideals of the ancient Indian rishis, namely that most instruction be given outdoors in nature, and that alongside academic subjects there be equal emphasis on teaching meditation and universal spiritual principles so as to develop the consciousness and not just the intellect of the child,” Janna explained.

The strands came together for a programme that “supports conventional education and teaches children everything we wished we’d had in our schooling.”

Self-awareness and development through yoga, meditation, story-telling and sharing circles; environmental awareness through organic gardening and hiking; and health and wellness through having healthy food at the school tuck shop and encouraging the children to eat less sugar and watch less TV.

Thinking out of the box

The team are young, enthusiastic and live what they teach. The program is currently running in two schools in Cape Town, one in Lavender Hill and the other in Khayelitsha.

“We will be approaching a school in an affluent area because the EarthChild principles are universal and can be used to unite children from diverse backgrounds.”

An Earthchild facilitator from the community is placed in a school full-time and introduces and maintains the holistic programme alongside the mainstream curriculum.

“It is important that the project is seen to come from within the school rather than being imposed on it; and it is tailored to benefit the specific school.”

Within a year the schools have an organic vegetable garden, worm farms, a recycling system, extra-mural activities such as yoga, story-telling and hiking clubs, healthy food in their tuck shop, and holiday programs offering clean experiential fun and learning.

“We have partnered with other organisations such as Urban Harvest, who are helping us set up the vegetable gardens and the Art of Living who have assisted with life skills training. We are working together to make the greatest possible impact.”

I attended a day at Sakumlandela Primary School in Khayelitsha which included cleaning up the grounds, a guided visualisation on cleaning the planet, tree planting, and a variety of extra-mural activities. What won me was the responsiveness of the children. The school is surrounded by informal housing which is where they live, and yet their zest to learn and take part was overwhelming.

When asked how they imagined the healed earth after their visualisation one youngster said that it felt so good “he was flying with the birds” and another said “the world felt so fresh and I was eating bananas off trees.”

The Earthchild Project is offered free to schools and is supported financially by a few companies and individuals, as well as by income generated from holding teachers’ retreats. It has drawn volunteers from UCT and abroad, bringing with them talents such as drama and dancing. A documentary of the project was recently screened featuring the Khayelitsha kids and their facilitator, Noks.