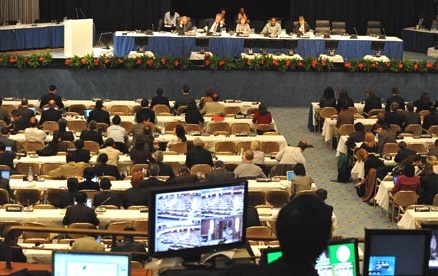 United Nations climate negotiations will resume for a ten-day session in Bonn, Germany, from 4-15 of June.

The negotiation session includes two ‘high level’ ministerial meetings, one on raising 2020 climate targets under the Kyoto Protocol, and another on the longer-term negotiations.

The longer-term negotiations, known as the “Durban Platform” and expected to conclude in Paris in 2015, are to raise current climate action (pre-2020) generally and create a new agreement for the post-2020 period.

The conference in Bonn will also include the ongoing technical work of the UN climate body, including on rules relating to accounting for emissions and a workshop on ‘long-term finance.’

It will be the first session with a large civil society observer presence since a “Walkout” of the negotiations at 2013’s Warsaw Conference, which ended with vague and ineffective decisions.

The Durban Platform negotiations will be undertaken in two “workstreams”:

Key emerging questions (with further information below) from the talks will be:

“The latest climate science is documented in our lived experience. Climate change is happening today and so people who have already lost so much are demanding action now. We demand reparations for the climate debt we are owed.  Cur climate pollution before it gets much worse.  Deliver the climate finance needed for our people to deal with the impacts.” Said Lidy Nacpil, of Jubilee South APMDD of the Philippines, who will be attending the talks.

“The outcome of the last climate summit was the complete wrong direction with weaker targets and less clarity on climate finance. Observers marched out of the Summit in Warsaw calling for people’s demands to be listened to over polluters’ influence – the Bonn meeting should indicate governments have raised their sights and they can do that by setting a credible pathway to raising pre-2020 action.”

“The history of these negotiations is littered with broken promises on climate pollution cuts by rich industrialized countries. The Ministerial meeting on raising the 2020 targets should change that course but I wouldn’t hold my breath. Without honoring those previous promises it’s hard to take new ones seriously – a dangerous situation for the talks.”

– Meena Raman, negotiations expert with Third World Network, a Malaysian based NGO and longtime observer of the talks said.

“The solutions to the climate crisis exist and people across the world are proving that everyday. We are fighting dirty energy projects and big corporations as well as building alternative, more sustainable energy and food systems. It’s these peoples’ solutions that the technical expert meetings need to take up, instead of persisting with failed carbon markets or trying to protect fossil fuel interests.”

– Asad Rehman, Head of International Climate at Friends of the Earth EWNI, based in London, said.

“We have seen news that the melting of the West Antarctic Ice Sheet may now be irreversible. Glacial melts in the Andes and the die-back of the Amazon rainforest will not be far behind, threatening our food sovereignty and water supplies – unless there’s a radical change of course. We will be making sure our government supports that change of course by letting the voices of impacted peoples and communities into the negotiating halls in December. We will not accept a steam-roller approach that gets a meaningless agreement for the sake of getting an agreement.”

– Osver Polo, a representative of the Citizens Movement on Climate Change (MOCICC) in Peru, attending the conference in Bonn to present demands from Peruvian civil society groups before the annual summit comes to Lima this December.