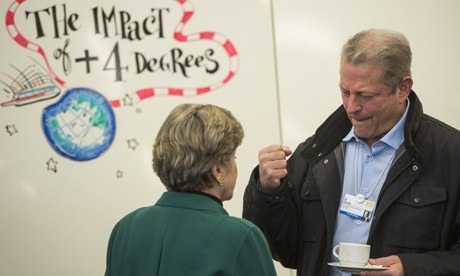 Extreme weather events including typhoon Haiyan and superstorm Sandy are proving a “gamechanger” for public awareness of the threat posed by climate change, Al Gore said on Friday.

The former US vice-president, speaking to delegates at the World Economic Forum in Davos, said:

“I think that these extreme weather events which are now a hundred times more common than 30 years ago are really waking people’s awareness all over the world [on climate change], and I think that is a gamechanger. It comes about, of course, because we continue to put 90 million tonnes of global warming pollution into the atmosphere every day, as if it’s an open sewer.”

But he said the falling price of solar and wind power gave hope for efforts to tackle climate change.

“There’s a second gamechanger, that is that the cost down-curve for photovoltaic electricity and, to a lesser extent, wind. In 13 countries, the price of solar is cheaper than or equal to the [electricity] grid average price.”

He claimed that within a decade most people would live in regions where that was true, and said of the falling costs of the technologies:

“It is very impressive and it is opening up great opportunities for the world to solve climate change.”

But he warned that growing prosperity as a result of development efforts could worsen global warming emissions, if energy was not generated in a clean way.

“As the poorest are being lifted up, as they’re getting lights and refrigerators, we are going to use more energy. There’s not a scenario here where we use less energy. We have to make the energy we use not emit any greenhouse gases, particularly CO2.”

Gore said that businesses were beginning to show leadership on climate change but many still do not. He added that support from government was vital for business.

In September, for the first time in several years, world leaders will discuss efforts to tackle climate change at a meeting convened by Ki-moon in New York. It comes ahead of a key UN summit in Paris in 2015 to agree an international deal on cutting carbon emissions.