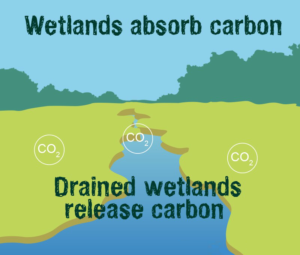 2 February each year is World Wetlands Day. This year’s theme is Wetlands and Climate Change.

Wetlands play an important role in reducing the impact of extreme weather events such as floods, droughts and cyclones. Wetlands act as a natural sponge, absorbing and storing excess rainfall and reducing flooding.

During the dry season, they release the water stored, delaying the onset of droughts and reducing water shortages. The frequency of natural hazards has more than doubled; the majority is climate and weather related.

Temperatures are rising, oceans are warming, snow and ice are melting and sea levels are rising faster than recorded during any previous century. Increased amounts of carbon dioxide (CO2), methane, and other greenhouse gases (GHG) in the atmosphere due to human activity are the reason. 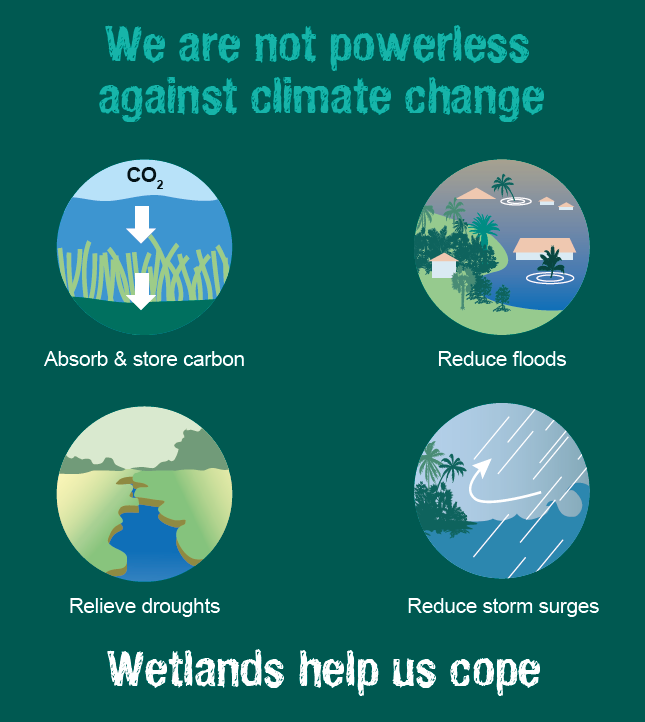 The level of CO2 in our atmosphere has increased 40% since pre-industrial times. To limit the impacts of climate change, the global  community via the Paris Agreement is seeking to stabilize and reduce GHG emissions, and limit the increase in global average temperature this century to below 2°C.

The frequency of disasters worldwide has more than doubled in just 35 years, and 90% of these disasters are water-related. Even more extreme weather is predicted going forward. Wetlands play a significant role in stabilizing GHG emissions and blunting the impacts of climate change.

Coastal wetlands such as salt marshes, mangroves, seagrass beds, and coral reefs act like shock absorbers. They reduce the intensity of waves, storm surges, and tsunamis, shielding the 60% of humanity who lives and works along coastlines from flooding, property damage and loss of life. 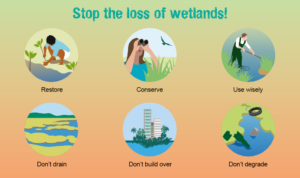 Peatlands, mangroves, and seagrass store vast amounts of carbon. Peatlands cover about 3% of our planet’s land and store approximately 30% of all landbased carbon – twice the amount than all the world’s forests combined. Wetlands are the most effective carbon sinks on
Earth.

When drained or burned for agriculture (as wetlands often are) they go from being a carbon sink to a carbon source, releasing into the atmosphere centuries of stored carbon. CO2 emissions from drained and burned peatlands equate to 10% of all annual fossil fuel emissions.

Strategies that address climate change must include the wise use of wetlands. We’ve already lost 35% since 1970. Individuals, communities and governments must work together to protect these amazing ecosystems, which help us prepare for, cope with and bounce back from the impacts of climate change. 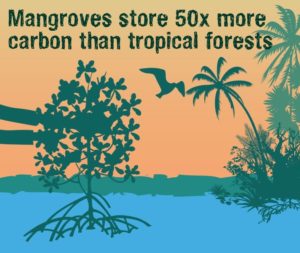 The world’s largest mangrove reforestation project is underway in the Casamance and Sine Saloum regions of Senegal. The projects aims to plant 79 million mangrove trees on more than 10,000 hectares, helping to restore a portion of the 45,000 hectares that have been lost since the 1970s. With the restoration of these wetlands, coastal areas will be buffered against storms, rice paddies will flourish, up to 18,000 extra tons of fish annually will be produced, 500,000 tons of carbon dioxide (CO2) over 20 years will be stored, and 350 local villages and 200,000 people will be involved, vested, and protected.

An intensive restoration of the Nordic-Baltic region’s peatlands is now taking place, with more than 20,000 hectares already restored. The initiative is part of the Nordic Council of Ministers’ commitment to “preserving peatlands for climate change regulation.” Representing Denmark, Finland, Iceland, Norway, and Sweden, the council is working to restore the 45% of peatlands in Nordic and Baltic countries that have been drained, and our responsible for almost 25% of the region’s total annual CO2 emissions. Restored, these peatlands will return to being carbon sinks, not carbon sources, helping to limit greenhouse gases in the atmosphere. 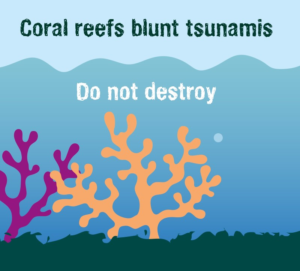 As coral reefs are dying from rising ocean temperatures, increasing ocean acidity, and direct human damage, their importance to local communities can no longer be ignored. Consider the 2004 Indian Ocean tsunami. In Hikkaduwa, Sri Lanka, where offshore coral reefs are protected through a marine park, the damage extended only 50 meters inland. In nearby Peraliya, where coral mining had degraded the reefs, the damage extended 1.5 kilometers inland. A recent study suggests that, compared to a dead coral reef, a healthy coral reef provides communities up to 2 times more protection from natural hazards like tsunamis.

In 2012 Hurricane Sandy slammed into the eastern seaboard of the United States, inflicting damage in 24 states. If not for coastal wetlands, the destruction would have been worse. A recent study found that coastal wetlands in the Northeast United States (U.S.) prevented $625
million (USD) in direct flood damages during Hurricane Sandy, reducing damages by more than 22% in half of the impacted areas and by as much as 30% elsewhere. The intensity, frequency, and duration of North Atlantic hurricanes have increased since the early 1980s, making the protection of the 50% of U.S. wetlands that remain an imperative.