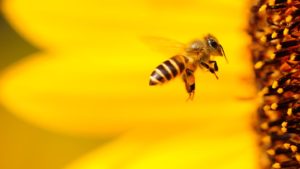 Billions of bees, butterflies, and beetles… are dying off, threatening ecological collapse. Toxic agricultural pesticides are among the key culprits, but we now have a unique chance to phase them out in Europe. If we help win there, the rest of the world could follow. But to make it happen we have to drown out the voices of the industry lobby.

Silently, the insect apocalypse keeps unfolding – billions of bees, butterflies, and other extraordinary tiny creatures are dying off, and the consequences may soon be catastrophic for our crops and fragile ecosystems worldwide.

Agricultural pesticides are among the key culprits. But now the European Union is considering a proposal to cut pesticide use by 2030 that could pave the way for a total phase-out across Europe in 15 years. As a trading superpower, the EU has enormous influence on setting global standards – and a win here could have ripple effects globally.

But first we must prevent the powerful chemical lobby from wrecking the plan. This is why we are joining an incredible coalition of environmental groups, farmers, beekeepers, and scientists to bring one million citizen voices and ensure EU institutions address our demands.

Your signature will also empower supportive parliamentarians with a massive boost of public support, so they can resist the army of lobbyists, and help save our bees and butterflies from deadly pesticides.

Recent studies suggest that more than 40% of insect species are declining, a third are endangered – and overall have an extinction rate eight times faster than that of mammals, birds and reptiles! These include the bumblebees, butterflies, beetles and other beautiful pollinators that sustain much of our food supply and delicate ecosystems.

Protecting wildlife habitats remains a crucial part of the fight to stop the collapse of our insect populations, but it is equally important to tackle the flood of pesticides going into our fields, parks, and playgrounds – 2.5 million tons every year! There is mounting evidence that agricultural chemicals not only cause water and soil pollution, they’re also deadly to bees and other pollinators.

But now we have a massive opportunity in Europe to push a new, pesticide-free agricultural model that allows nature and farmers to thrive in harmony. Key EU lawmakers are ready to fight for the most ambitious deal ever to transform our food and farming systems, but they need all our support.

Momentum is building to address the issue not only in Europe – the UN just published a plan to drastically reduce pesticide use ahead of international negotiations later in the year. If we help win in Europe, more countries will follow, bringing us a step closer to saving our bees and pollinators from extinction, and help small, sustainable farmers to flourish.

Please sign the petition and create a massive buzz for the bees, and share with everyone. Avaaz and their partners will make sure our voices are heard in every important meeting ahead.