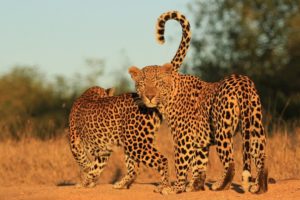 Leopard siblings Jack and Claudi began the adventure of their young lives when they were recently released into the wild at Nkomazi Private Game Reserve near eManzana (Badplaas) in southern Mpumalanga.

The two animals were stolen from their den while they were still tiny cubs and offered for sale to illegal wildlife traffickers.

Members of the Mpumalanga Parks and Tourism Agency (MPTA) got wind of the theft and managed to rescue the cubs about 18 months ago.

The MPTA handed the two leopards over to the Care for Wild Rhino Sanctuary, where they spent three months before being moved to Nkomazi in May last year.

“It was an emotional moment for me to see those two animals walk free,” says Nkomazi’s co-owner Dewyk Vos.

“They’ve spent the past 14 months in a quarter hectare enclosure and this became too small for them. The time was also right to release them into the greater part of the reserve: any longer in captivity and they would not be able to be rehabilitated.”

The first step to wilding an animal raised in captivity, he maintains, is overcoming their familiarity with people.

“In the beginning, obviously, we had to spend quite a lot of time with the cubs for feeding, cleaning and protection. However, over the past five months, their only contact with people has been when we dropped off food.”

Nkomazi Private Game Reserve covers an area of nearly 15 000 hectares. The two animals were thoroughly checked out by MPTA veterinary specialist Gerrie Camacho prior to their release and given a clean bill of health.

Vos said Jack and Claudi showed initial reluctance to leave the security of their enclosure and had to be enticed out by dragging a warthog carcass behind a game vehicle in front of them.

“We fitted Claudi with a new tracking collar within the last month and have a student ranger who will track her movement via global positioning satellite (GPS). We will be able to pinpoint her position in real time for the next 24 months.

“Jack was fitted with a tracking implant so we can follow him via radio telemetry. The two young leopards would face significant challenges, Vos added, not least being the expanse of their new environment, the presence of other predators (especially lions) and learning to hunt without a mother as a mentor.

“The natural environment is on their side: the property is large enough to accommodate quite a few leopards and there is sufficient food for them to thrive,” says Vos.

“Our anti-poaching unit will watch over them at night to ensure the lions don’t get close. We will also check whether we have to do supplemental feeding while they’re improving their hunting skills.”

Vos hopes Claudi will eventually mate with another adult male on Nkomazi with Jack perhaps pairing with the second female on the reserve.

“That female is the success story on which we have based this rehabilitation project. She was released after being in similar circumstances to Jack and Claudi and has flourished as both hunter and mother. There are three adult leopards on Nkomazi, a male and two females, one of which has cubs. We have limited capacity for leopards and, if all the females breed successfully, we won’t be able to keep all the cubs. The point is that we’ll be able to supply other reserves and, by so doing, strengthen the gene pool and reduce in-breeding.”

Vos says Nkomazi is strongly committed to conserving endangered species “because it’s the right thing to do” but admits that their presence – especially that of predators – is a powerful drawcard for tourists.”

Nkomazi Private Game Reserve is managed by Newmark Hotels, Reserves, Lodges & Residences. The reserve features a riverside tented camp of 14 luxury tents, which reopened in November 2020 after a comprehensive refurbishment.