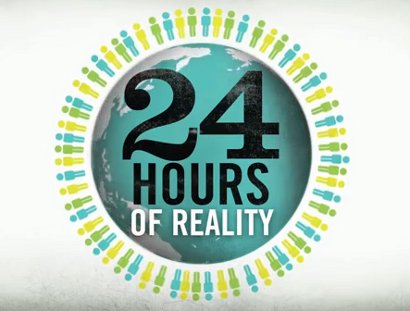 The organisations also announced the launch of The Climate Reality Project Africa, a new branch that will further mobilise individuals and communities across the continent in the fight against climate change.

“We are proud to be able to engage with passionate climate leaders across the continent,” said former U.S. Vice President and Climate Reality Project Chairman Al Gore.

“This is a critical time for Africa. Though Africa produces a relatively small proportion of the carbon pollution driving global climate change, the continent bears a disproportionate share of its impacts. Drought, desertification and food shortages are becoming more widespread, and the continent faces daily reminders of the dire consequences of inaction. The good news is that if we act together now, we can solve the climate crisis, and Africa is already playing a key role in that effort.”

The three-day intensive training program, held March 12-14, was designed to equip individuals from Africa and around the globe with the communications skills, knowledge, tools and drive to educate and activate diverse communities on the costs of carbon pollution and what they can do to help solve the climate crisis.

Under the leadership of Food & Trees for Africa, The African Climate Reality Project will work with climate leaders, governments, NGOs and scientists across the continent to create the tools, resources and network of African leaders to mobilise communities from Algeria to Zimbabwe in the fight for solutions to climate change.

“I’m deeply honored to help to establish The African Climate Reality Project,” said Jeunesse Park, founder of Food & Trees for Africa. “This comes at a crucial time for the continent of Africa as we face increasing climate instability. Whilst this presents us with many challenges, we also have the unique opportunity not only to help millions of Africans understand climate change, but also to innovate and implement solutions that we can share with the rest of the world.”

With a global movement more than 5 million strong and a grassroots network of trained Climate Reality Leaders, The Climate Reality Project is spreading the truth of the climate crisis to communities everywhere and creating cultural momentum to solve it.

About Food & Trees for Africa

24 years later Food & Trees for Africa has been recognised through five United Nations and many other awards for the planting millions of trees, thousands of permaculture food gardens and now organic farms. These programmes are changing lives and landscapes and growing food, farmers, and fortunes towards thriving communities – see www.trees.org.za for more information.