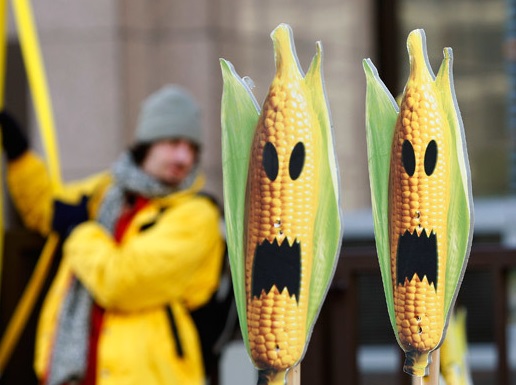 A draft law submitted to the Russian parliament seeks to impose punishment up to criminal prosecution to producers of genetically-modified organisms harmful to health or the environment.

The draft legislation submitted on Wednesday amends Russia’s law regulating GMOs and some other laws and provides for disciplinary action against individuals and firms, which produce or distribute harmful biotech products and government officials who fail to properly control them.

At worst, a criminal case may be launched against a company involved in introducing unsafe GMOs into Russia. Sponsors of the bill say that the punishment for such deeds should be comparable to the punishment allotted to terrorists, if the perpetrators act knowingly and hurt many people.

“When a terrorist act is committed, only several people are usually hurt. But GMOs may hurt dozens and hundreds. The consequences are much worse. And punishment should be proportionate to the crime,” co-author Kirill Cherkasov, member of the State Duma Agriculture Committee told RT.

Russian criminal code allows for a punishment starting with 15 years in jail and up to a life sentence for terrorism.

Less severe misdeeds related to GMOs would be punishable by fines. For instance the administrative code would provide for up to 20,000 rubles (US$560) in fines for failure to report an incident of environmental pollution, which would also cover harmful GMO contamination, if sponsors of the bill have their way.

Russia gave the green light to import of GMOs and planting of bioengineered seeds as part of its accession to the WTO, but the Russian government remains skeptical of GMOs. In April, Prime Minister Dmitry Medvedev announced that his cabinet will postpone the beginning of certification of GMO plants for growth in Russia due to lack of proper infrastructure needed to test their safety.

The government also opposes imports of GMO food, saying the country has enough farmlands to provide enough regular food to feed itself.

But the new draft legislation, even if adopted, would be difficult to enforce in practice. Proving a direct link between certain GMOs and health or environmental problems could be difficult, considering that harmful effects, if they manifest, may take years to become apparent.

Critics of the draft bill also point out that it fails to suggest amendments to laws regulating textile production and pharmaceutical industry, both of which have been using genetically-altered products for years.

“The global pharmaceutical industry uses GMOs much wider than food industry does. And there is the question, who should be punished in this case – producers of medicines which are used to treat people, or those who want to ban them,” commented Aleksandr Korbut, vice-president of the Russian grain union, to Izvestia newspaper.