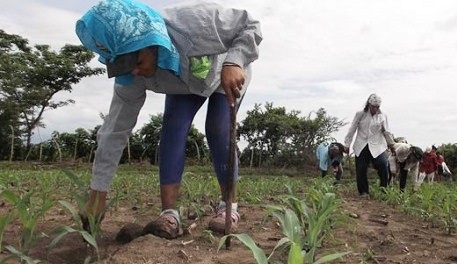 Farmers insinuate that the Monsanto seeds offered by the U.S. were seeds that they weren’t able to sell otherwise. Farmer Juan Joaquin Luna Vides claims,

“Transnational companies have been known to provide expired seeds that they weren’t able to distribute elsewhere”.

Even though El Salvadorians have made it clear that they do not desire foreign aid if it means forcing farmers to use Monsanto seeds, the United States continues to pressure their government to accept it. How often has U.S. “foreign aid ” actually truly benefited the country that was in need? Many times, foreign aid has turned into the US government taking money from poor people in America via taxes, and giving it to repressive regimes in poor countries. When it comes down to it, U.S. foreign aid largely consists of government influencing other countries into positions in order to benefit large corporations.

Over the past two months El Salvador has been pressured by Millennium Challenge Corporation (MCC), a U.S. foreign aid agency created during the presidency of George W. Bush. The US, According to the MCC policy, says it will only provide assistance if there is specific economic and environmental alterations. These “alterations” ultimately would require farmers to only purchase Monsanto GM seeds.

“Domestic producers have proven their ability to cultivate a quality product to government standards, offered at a significantly lower price than what the government had historically paid for conventional seed supplied, by-in-large, by a singular Monsanto affiliate.”

The message that these farmers are sending to Washington is that they don’t want our dirty money or corporate welfare, but Washington is persistent.

This isn’t the first time that economic warfare has been waged by the US on behalf of Monsanto. Diplomatic cables released by WikiLeaks via Chelsea Manning show that France and the EU as a whole were targeted by threats of US economic sanctions due to their rejection of GMO crops. The diplomats that were making these threats coincidentally consulted with Monsanto privately.