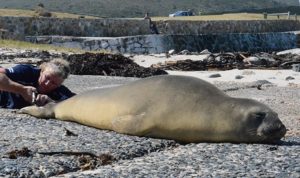 The Department of Environmental Affairs (DEA) first tagged Buffel back in 2014 and have been tracking his trips back to our shores ever since. Image: Country Life SA

The City of Cape Town and the National Department of Environmental Affairs (DEA) have received reports regarding the harassment of an elephant seal moulting on Fish Hoek beach.

They advised residents and visitors on Wednesday that this is a natural process and asked that all beachgoers respect the seal and give the animal space while it is ashore, staying at least 10 metres away when viewing and photographing.

“The City of Cape Town and the National Department of Environmental Affairs (DEA) would like to remind the public of the elephant seal moulting period which is currently under way,” said Marian Nieuwoudt, Mayoral Committee Member for Spatial Planning and Environment.

“Fish Hoek beachgoers can expect to see the seal ashore for a few more weeks. A moult is a process by which the elephant seal sheds all of its pelage and underlying epidermis. This annual process can take up to a month to complete.

“During the moult, the elephant seal remains on land as the process of moulting renders them sensitive to changing temperatures, therefore they avoid the water. During this period, the seal generally does not feed either as it is able to sustain itself through its blubber (fat reserve).

“The City and DEA request that the public respect the elephant seal during this period and stay at least 10 metres away when viewing and photographing him. Tape has been put up to demarcate the area and residents are to please abide by this.

“Beachgoers who plan to walk their dogs should keep them on a leash at all times within 50m of the animal. We ask that you please do not attempt to feed the seal, throw water on it or create any other unnecessary disturbance within close proximity to the animal.

“In particular, taking selfies with your back turned to the animal and within close proximity is strictly prohibited. These seals can also move deceptively fast when on the beach and are extremely dangerous when they feel uneasy or cornered.

“While this particular seal seems to be relaxed, please note that it is a wild animal that can inflict a serious bite and its behaviour is unpredictable.”