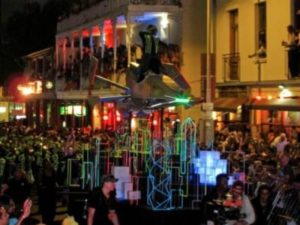 I’ve recently been involved in designing and building the floats for the Cape Town Carnival which took Long St by storm on the 19th of March. I wanted to report happily on our experience of using solar batteries on one of the Carnival floats, which is largely unknown.

While using solar energy in some form was my intention from early on, it wasn’t certain that we’d manage it until very near the end, so not many (if any!) people actually realize that the Energy float (with the glowing robo-dancers) was in fact solar-powered.

The floats of the Cape Town Carnival are propelled by people power (pushed :-). But every float has a lighting and sound system which requires electrical power. The standard solution is to equip each float with a generator which is the solution that was applied to most of the floats, largely because it is tried and trusted (a.k.a. the way things have always been done). The opportunity to use solar power beckoned however from the outset.

When one of the approved float designs ~ depicting a spacecraft above a city of the future ~ was themed “Energy”, the opportunity to use solar power seemed all the more vital.

Considering that the theme of the Carnival this year was “Dream the Future” it made strong sense to make a positive demonstration of how we dream the future of our energy use. At the same time, I admit I was a little anxious: Would solar batteries last long enough at the output required? Would they be able to deliver what we needed? Would we be caught short for trying something new?

Well, as it happened, the solar batteries ~ kindly supplied to us by MLT Drives with great professional assistance from Mathias ~ outperformed the generators. They were silent. They were reliable. They were powerful. And they were trouble-free. Ironically, by contrast, two other generators on other floats failed, leaving the finale float essentially without music. Guess what I wished? That all of them were solar!

Who knows? Maybe next year they will be. At the very least, I personally hope to see more of the floats running on solar batteries. And I’m glad we were able to give a positive public demonstration of their effectiveness.