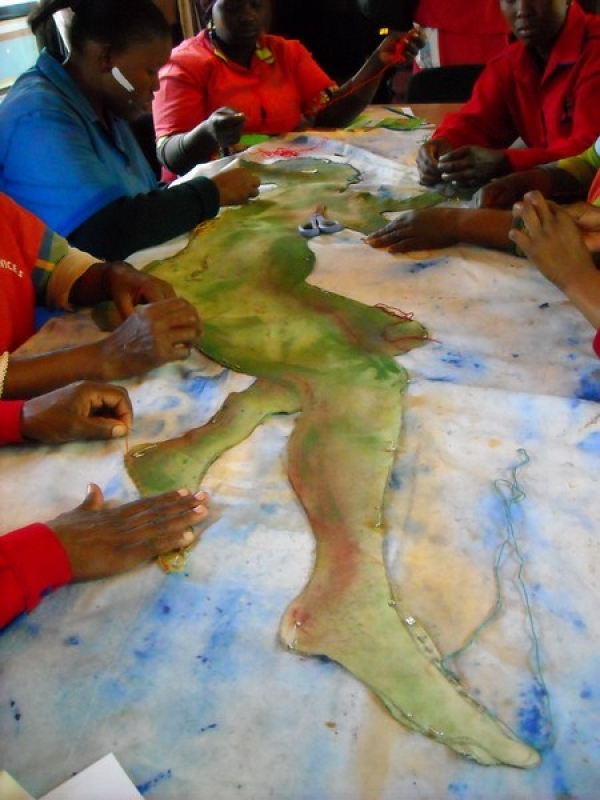 It was the morning of day nine of our journey across South Africa on the Climate Train. I found myself lying on the boardroom table in the conference carriage. Perfectly still, I lay on a large piece of canvas looking out at the dinky station with sunny yellow boarders. My dear friend and fellow cultural practitioner on the train, Dylan McGarry was sketching my body’s profile.

Dyl wanted to use a woman’s silhouette, cut out of used canvas, to form the shape of Mother Earth. The idea was to create a space for people to sit in the shade and hand-sew together.

There had been some organisational problems that day so we were not expecting any school groups to work with but the railway station’s cleaning staff came to have a look at the train. After a tour, they started to add their images to the Krugersdorp canvas with our supplies of natural ProNature paint. It was a real scorcher and many people had retreated to the shade of the train and stood observing their friends painting. One man broke out into some kwaito dancing, moved by the music of a near-by sound system. I invited some women to join me in the cool of the boardroom. The prospect of sitting in the cool of the train was enough to gather quite a group.

The women around the large table with me all knew each other and I felt like it was much more important to just make a comfortable space to talk amongst us than consciously trying to start a discussion about climate change. Another factor was the language barrier: the women spoke Tswana and they were cracking jokes and having great banter so initially I felt quite isolated and redundant.

Then I thought about Dyl and his Earth Forum and the way he spoke about listening with his heart. So I tried to listen around the language. I picked up the odd word in English but mostly I just kept myself busy sewing and chatting to Teboho (teh-boh-gho), the woman next to me, about her journey to work and her children, and actively listened to the tone and the emotions of the conversation of the table. I just felt like there was no easy way to infiltrate their conversation and any attempt to steer it might seem condescending.

Suddenly, Xiluvani (shi-loo-vah-nee) exclaimed, “Twelve thousand! I’m telling you!”. This drew Teboho out of our conversation and into the eruption of disbelief and jeering. After a while my curiosity got the better of me and I asked Teboho what they were talking about. She said, “This woman’s friend is collecting plastic bottles and cans for recycling and she is making twelve thousand rand this month!”

And it suddenly struck me. Without any lame attempts draw out a fulfilling discussion about living in a climate changing world or trying to force any lesson on these women, a practical, relevant and environmentally conscious conversation had emerged. It was the subtle draw of working together on a portrait of Mother Earth that had gently brought environmental concerns into our minds and it was the time and space given to talk to each other that allowed the conversation to emerge.

Elizabeth Fletcher is a co-ordinator of the COPART movement on the Climate Train. She writes daily for the COPART blog. Elizabeth is also a lecturer at the University of the Western Cape and Masters Student in English literature specializing in South African crime fiction. She edits and writes for Crime Beat.