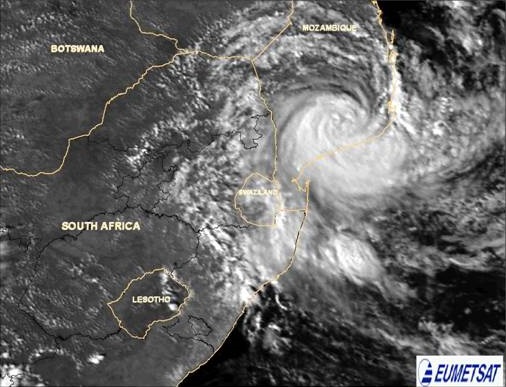 A near-infrared image taken on the 16th from the Meteosat Second Generation satellite showing the depression after landfall as it moved into Mozambique on its way towards the eastern parts of South Africa.

The worst might be over, but now reality strikes. Hundreds of people in Mozambique, Limpopo and Mpumalanga must now pick up the pieces of their already difficult lives after heavy rain and floods left them destitute and the community in shambles.

It might no longer be front page news, but have you given a thought the terrible trauma of piecing a life together after such floods, which scientists confirm are contributed to by human behavior.

At least 5 people died and more than 5 000 families have been displaced in flooding in Mozambique’s southern region.

In Limpopo a total of 220 families were affected by last week’s floods in Maruleng, leaving 101 families in need of immediate shelter, while the Mpumalanga floods claimed the lives of 6 people and destroyed several schools and buildings.

Tropical storm Dando was the fourth storm to hit the southern African country of Limpopo this season. The downpours started on Sunday and continued until Tuesday, leaving behind a trail of destruction. Thousands of homes were left destroyed and flooded with many schools and health centres also severely damaged and some even totally washed away.

The 120km/h wind and rainfall of over 200mm left 3 people dead in Gaza province and 2 in neighbouring Maputo province. In Gaza, Dando flooded 3 766 houses, while 247 were swamped in Maputo.

Farmers, who are still trying to recover from similar devastation from the deluges of 2010 and 2011are still counting their losses after many agricultural lands in several districts were left under water- wiping out their crops and livestock.

Although no lives were lost in the Limpopo flood 101 families were left without shelter.

To make matters worse, government estimates that R6m worth of crops – such as avocados, citrus, mangoes, and maize – had been destroyed in the floods as well. It’s estimated that infrastructure damage to fences, irrigation equipment, dams, and storerooms will cost the government a total of R21m.

The downpours in Limpopo were allegedly a direct response to the arrival of an extra tropical depression onto the southern Mozambique.

The Kruger National Park was also badly impacted by the heavy rain that deluged sections of the park. But South African National Parks (SANParks) chief executive David Mabunda said that no animals have been killed or hurt.

The Mpumalanga floods which claimed the lives of 6 people left 118 schools inaccessible to pupils and educators.

Meanwhile, a total of 112 sites have been affected by infrastructure damage to bridges, culverts, patching, slip failure, erosion, and re-gravelling.

Kunene added that the department of health was also monitoring the situation for any outbreaks of waterborne diseases in all municipalities. Clinics that were affected by water logging at entrances were now accessible after being cleared.

According to Johan Malherbe from the Agricultural Research Council-Institute for Soil, Climate and Water (ARC-ISCW) tropical cyclones, storms and depressions from the southwest Indian Ocean influence the eastern and northeastern parts of South Africa on average about six times per decade during the January to March period.

He said these systems have been responsible for the highest multi-day rainfall over parts of South Africa, especially over the Limpopo.

“Rainfall associated with these systems can be particularly heavy along the Escarpment due to the orographic uplift (airflow confronting a mountain barrier, causing the air to rise) of tropical moisture associated with them. Climate projections suggest that the frequency of tropical cyclones could diminish in future but that the numbers of most intense systems could increase under enhanced anthropogenic (caused by humans) forcing. Over South Africa, extreme precipitation events and flooding are, associated with systems of tropical cyclone intensity, as well as with weaker systems from the southwest Indian Ocean such as tropical depressions, of which Dando was a good example,” he said. 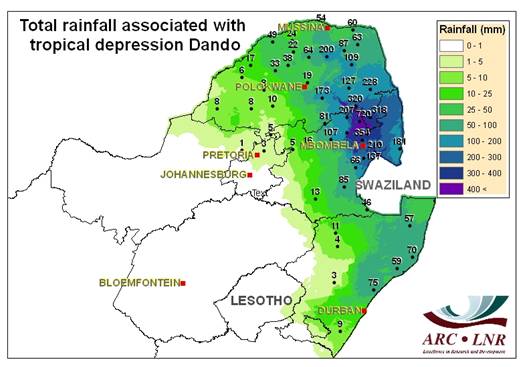 This map constructed from rainfall data recorded by automatic weather stations of the Agricultural Research Council-Institute for Soil, Climate and Water indicates rainfall figures for a few selected stations.

Malherbe said studies based on historical climate data since the middle of the last century further indicate a quasi bi-decadal oscillation to the influence of these systems over the northeastern parts of South Africa with the previous maximum between 1993 and 2000.

“Since this type of system has happened about every few years since records have begun, I would not relate it to climate change directly. Projections show, this type of event will happen less in future over our region specifically due to a northward displacement of tracks of these systems. However, because a warmer atmosphere can keep more moisture, the capacity for rainfall along the escarpment when moisture flows and is lifted up over the region, increases as the average temperature increases – increasing the capacity of individual systems to contribute,” he concluded.

About 300 families displaced by floods that have hit rural parts of KwaZulu-Natal in recent days have started receiving some relief packages containing hot, freshly prepared meals, drinks, hygiene packs and new clothing from the charity organisation Gift Of The Givers.