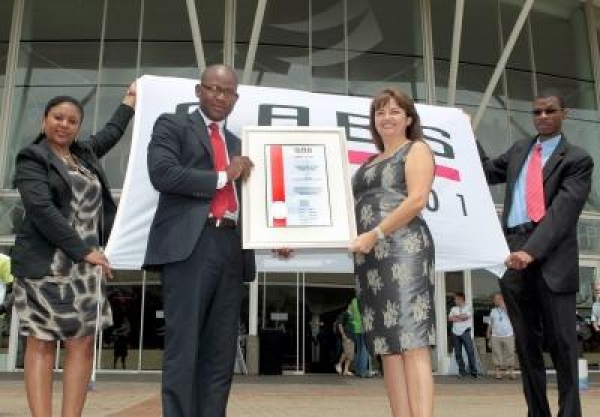 The ICC has received a certificate confirming that the Durban International Convention Centre’s Environmental Management System complies with the rigorous performance standards set by the International Standards Organisation.

‘The certification addresses ICC Durban’s Environmental Management System and assures that it complies with the rigorous performance standards set by the International Standards Organisation (ISO), a group that sets quality and environmental management standards for businesses,’ she says. ‘The ISO 14001 certification adds to our existing ISO9001, ISO22000 and SANS 10330: HACCP certifications.’

The ICC Durban completed its stage II ISO 14001 audit in September. Being ISO14001 certified verifies that the ICC Durban is minimizing its harmful effects on the environment and is continually working to improve its environmental performance.

A huge stamp of quality

Ellingson adds: ‘We are delighted to receive the ISO 14001 certification, in addition to the ISO9001 and ISO 22000 certifications, confirming ICC Durban’s dedication to high-quality management practices. It is a huge stamp of quality for our organization and one that our team worked very hard to achieve. Our clients and key stakeholders can be assured that we have become an industry leader effecting positive change in preserving our environment. Together with the ICC Durban team we are proud of achieving this important certification and we are committed to demonstrating excellence every day.’

The ICCD building is a high-tech design which has incorporated green elements such as large glass facades for natural lighting, energy efficient light fittings and air-conditioning systems, as well as indigenous landscaping. The gardens are populated predominantly with indigenous plant species local to KwaZulu-Natal, which results in limited need for irrigation.

The only exception being the three iconic Baobab trees which were planted as cultural icons, representing the three major cultural groups that occur in the province of KwaZulu-Natal.

The ICC grows its own culinary herbs for use in its kitchen, which serves the majority of catering needs at the ICC. This initiative will be expanded in the near future to include a wider variety of herbs, as well as vegetables.

The ICCD has a stringent waste separation policy which aims to achieve the maximum possible volume of waste being sent for recycling. During the first half of 2011, more than 50% of the waste generated at the ICC and Exhibition Centre (DEC) was recycled.

The ICCD and DEC have recently undergone an energy efficiency retrofit, which includes the latest in lighting technology. This retrofit is anticipated to reduce the energy requirements of the complex by 215kW, approximately 7% of the current total demand.

The ICC Durban, will be the focus of the world’s attention in just over a month’s time, when the 17th Conference of the Parties to the United Nations Framework Convention on Climate Change and the seventh conference of the parties to the Kyoto Protocol, known as COP 17-CMP, will meet to negotiate the future of our planet as they seek to reach agreement on reductions in global greenhouse gas emissions, the key contributors to man-made climate change.

The event is the largest gathering of participants globally around the issue of climate change and the largest conference ever to be held on the African continent.