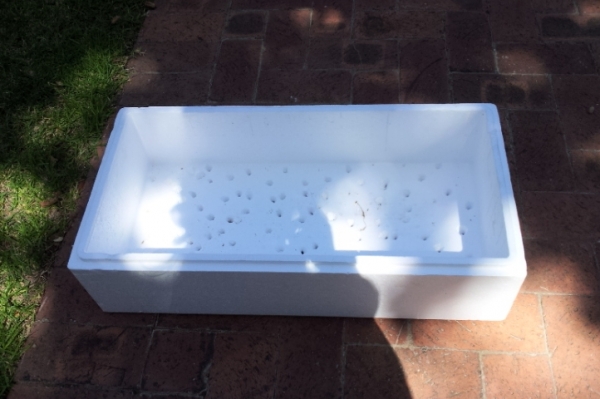 The time has come to sow the seeds for our next veggie harvest. We trust that your compost is coming along nicely? Please comment below this story, if you need any help.

So let’s get the next season’s seeds sown. You can either purchase seed boxes from your nursery, or I got mine from Builder’s Warehouse, or simply use what you have. Vinny is good at collecting used polystyrene fish trays from the back of Checkers, where they throw them out. They make wonderful planters and are deep enough to grow your veggies in until you harvest the food. So you don’t even need to plant out the seedlings if you want to use these deeper trays. See what you can find at the back of your supermarket and be creative.

Here is a clip of the two of us doing the sowing. It is our first attempt at making a clip, so don’t expect too much. We will do this for you every step of the way, and they will improve as we go along.

Ensure your planters have sufficient holes at the bottom for drainage. Use a screwdriver to punch holes into the polystyrene trays (see main image).

What to use for soil: You can use either a mixture of potting soil and compost, which you have purchased. If you have an old compost heap like myself, I simply use compost straight from my pile as this is already mixed with soil. Whatever you do, you want the best soil mixture you can find – and do remove stones of big leaves.

Where to get good seeds? We only use organic seeds, which you can get from Soil for Life. Go to your nearest organic market and ask for seeds – there will usually be someone keen to share. 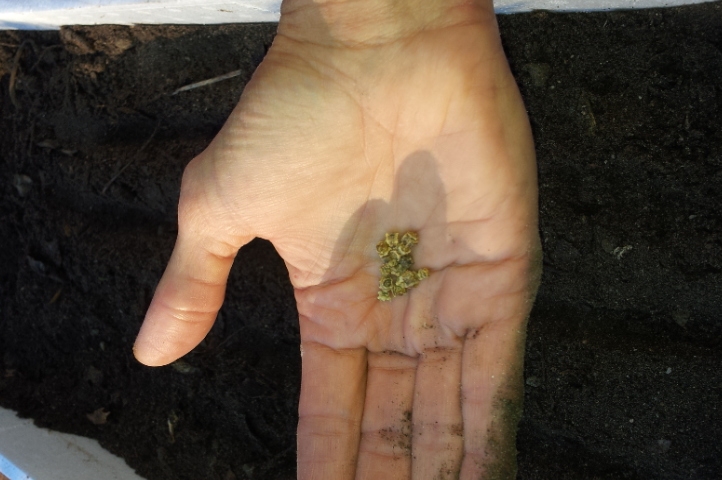 Organic seeds come from strong organic plants and are not treated with chemicals or genetically modified so that you can’t harvest the seeds for your next crop. This is clearly absolutely important as you need to ensure your harvest goes on and on and you are able to feed your family more and more healthy food fresh from the garden.

You can learn more about heirloom seeds from Living Seeds.

Here is how they describe these, the Rolls Royce of seeds:

Heirloom vegetables can be simply defined as any plant that has been handed down from generation to generation. However there is much debate and discussion between various organisations and bodies that try to place limits and stipulations as to what defines an heirloom plant. We believe that any plant that is firstly open pollinated, secondly has a history of private exchange and thirdly has not been subject to a plant breeders rights claim to be worthy of heirloom status. This definition is however not cast in stone and is open to constructive discussion.

Worldwide the genetic variability of plants and specifically of concern to us, vegetables is rapidly being destroyed. Small seed houses are being swallowed up by large corporate seed companies, who shut down these operations to ensure that their highly profitable hybrid and GMO varieties are pushed into public and commercial use. Open pollinated and heirloom varieties are sidelined as they do not have the revenue based return business that hybrids possess.

In South Africa specifically, many varieties of traditional subsistence crops are disappearing at an alarming rate, as they are being replaced by common hybrid and GMO varieties. It has been estimated that there were over 300 different varieties of traditionally grown mielies (Corn) in the homeland areas of South Africa, where subsistence farmers would religiously practice seed saving from year to year.

Now, with the new hybrid and especially GMO varieties that our government has recklessly allowed to be planted, the genetic diversity of these traditional varieties is being destroyed at a rapid rate. Basically, the traditional farmers have lost heirloom varieties that have adapted over hundreds of years to their specific environmental and pest loads.

The late Prof Jack Harlan was a world renowned plant geneticist who wrote the classic work Crops and Man while he was the Professor of Plant Genetics at the University of Illinois. In it he wrote the following statement.

“These [genetic] resources stand between us and catastrophic starvation on a scale we cannot imagine. In a very real sense, the future of the human race rides on these materials. The line between abundance and disaster is becoming thinner and thinner, and the public is unaware and unconcerned. Must we wait for disaster to be real before we are heard?”

Mankind has reduced his agricultural dependence down to a handful of crops, within that handful, the lines of differentiation in genetic material is so fine that there is no longer a vigorous genetic reservoir that scientists and agronomists can draw upon. If a disease or plague had to strike, mankind could very well be left holding an empty grain sack.

Preserving the genetic viability is critical. One way that seed banks and seed saving schemes help mankind, is to create a repository of genetically diverse seed stock to allow scientists to literally go back in time and utilise this genetic resource to correct deficiencies or increase specific areas of resistance in existing crop varieties, without the need create a genetically modified organism (GMO). Unfortunately, almost all seed banks are closed to the public and you need to be a registered plant breeder to gain access to these stocks of seed.

You can order heirloom seeds from Organic Seeds. 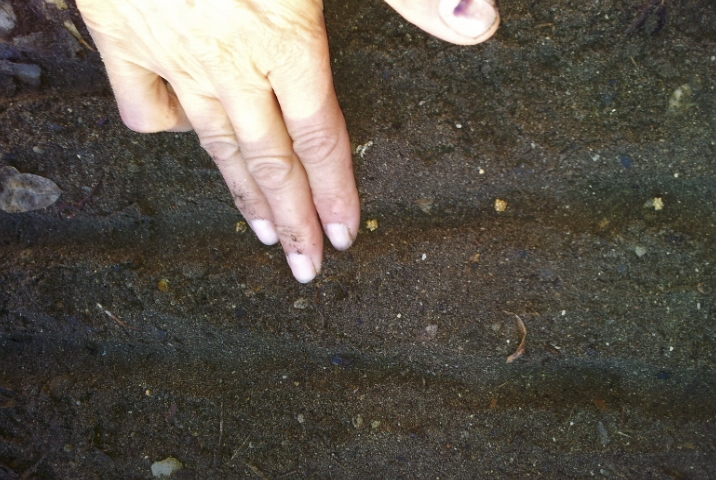 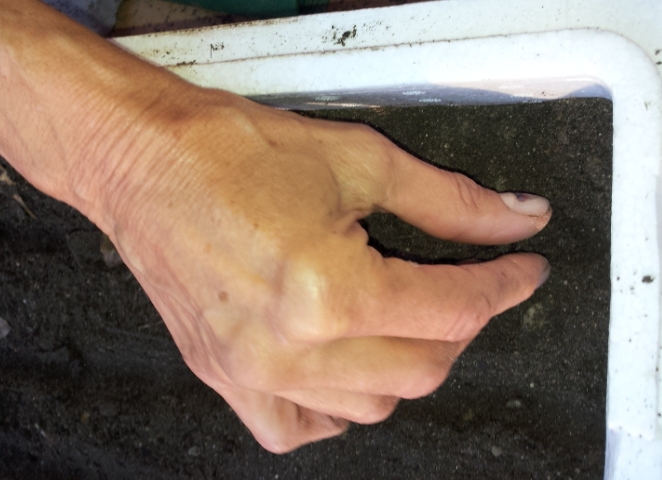 Later these will be thinned out. I have also been told to mix the very tiny ones with larger ones for easier sowing. Remember some planets love growing together. We will write about companion planting at the stage when we plant our seedlings into our prepared vegetable beds. Insert markers to remind you what is growing where – I cut mine from old polystyrene cups – you could also cut strips from yoghurt cups, or use can tops, like Vinny, to write the name onto.

It is good to spread very fine mulch over your soil, to keep it moist and protect your seedlings from the sun. 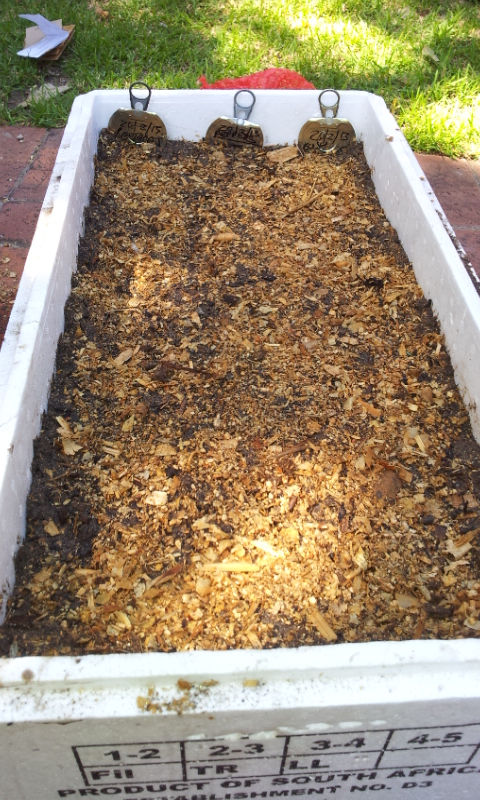 Now you need to sprinkle very gently with water – be careful not to wash the little seeds out. Easiest is to make some holes in the bottom of a tin can to create your own watering shower. Scoop water into this from a bucket and create a nice spray. Keep seed trays wet by watering up to twice a day. 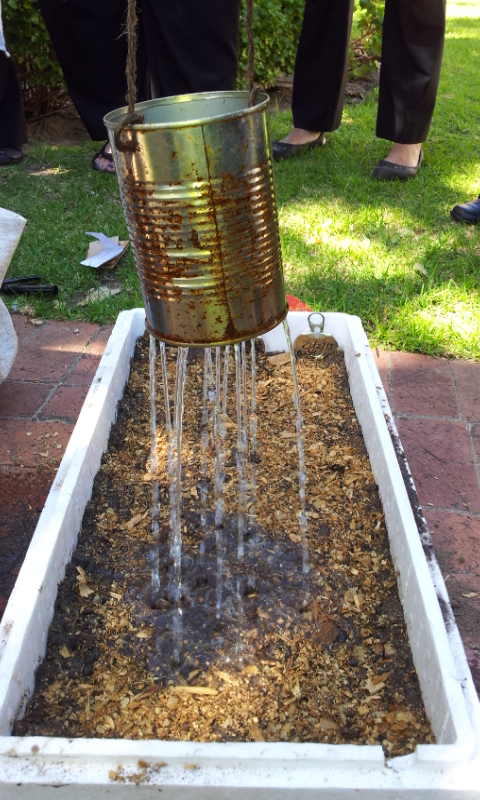 Once a week we need to feed our seedlings. No artificial fertilisers please – use natural manure for the job. You will see in our clip how Vinny places some nice hard balls of horse manure into an old orange bag, which is then submerged into a bucket with water. This stands until the water is nice and dark.

Now you fill your homemade watering can with this good organic plant juice and sprinkle your seed trays. We are going to use this organic juice for our vegetable beds going forward, so find out right away where you can purchase some manure – horse or cow manure is good. Get a few bags from a farm and you will never need any other fertiliser. You need to add some to your compost too, so befriending a farmer is always a good idea.

If necessary cover your seed trays with chicken wire or netting to protect them from snails and birds.

I place my seedtrays in dappled sunlight as full sun can be too strong in our part of the world. If you have a small hothouse, all the better. I think we should explore building such a thing as part of this course. Most important is to keep the soil moist and keep the bugs away. Removing by hand is a good way. We will talk more about insects in the future. Little sprouts should appear within 10-14 days.

Next time we will dig the vegetable trench. Let us know how you are progressing and send us photographs of your work.

By Elma Pollard and Vinny Drew