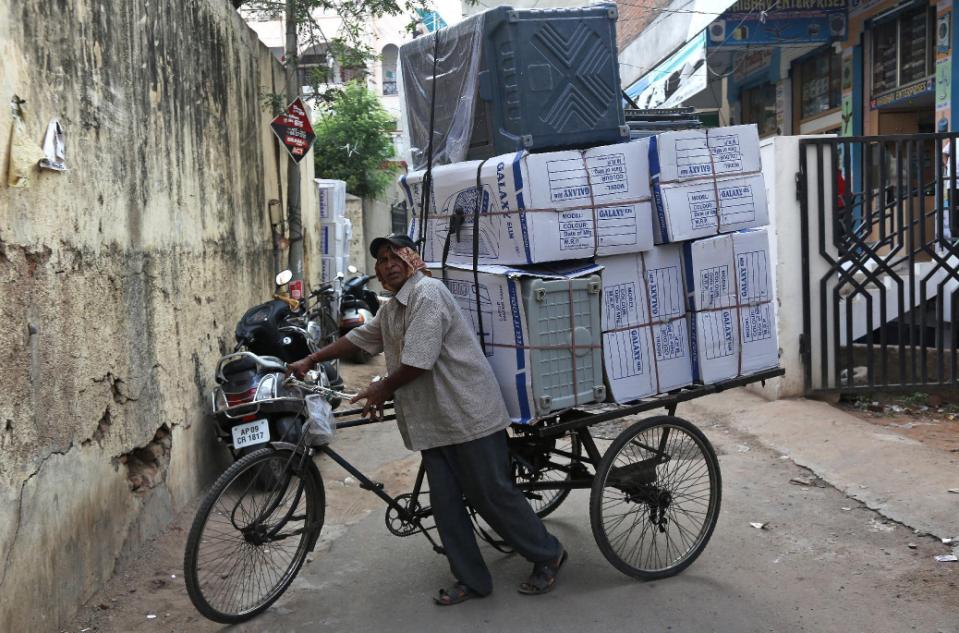 An Indian rickshaw puller transports a load of air coolers at a market on a hot summer day in Hyderabad, in the southern Indian state of Telangana, Saturday, May 30, 2015. Heat-related conditions, including dehydration and heat stroke, have killed more than 1,000 people in the southern Indian state of Andhra Pradesh and hundreds in Telangana since mid-April, according to state officials. (AP Photo/Mahesh Kumar A.)

Showers and thunderstorms in parts of southern India on Saturday helped eased a weekslong summer heat wave that has claimed nearly 2,000 lives.

The intense heat, however, was expected to continue in some areas of worst-hit Telangana and Andhra Pradesh states for another 24 hours, said Y.K. Reddy, an Indian Meteorological Department director.

Heat-related conditions, including dehydration and heat stroke, have killed at least 1,490 people in Andhra Pradesh and 489 in Telangana since mid-April, according to state officials.

Daytime temperatures hovered between 40 and 45 degrees Celsius (104 and 113 degrees Fahrenheit) in the two states on Saturday, after soaring to as high as 48 C (118 F) earlier in the week, the meteorological department said.

A strong thunderstorm brought some relief from the stifling heat to Anantapur, a town in Andhra Pradesh, though the storm uprooted trees and electricity poles and cut power in some areas.

People also heaved sighs of relief in the Telangana state capital of Hyderabad and Telangana’s Mehubnagar district, which recorded 1 centimeter (.39 inch) of rain.

However, at least four districts — Guntur, Krishna and East Godavari in Andhra Pradesh, and Nalgonda in Telangana — were still in the grip of the heat wave, the meteorological department said, adding that they would likely get some relief in the next 24 hours due to rain in nearby areas.

Cooling monsoon rains are expected next week in southern India before gradually advancing north. The monsoon season will last until the end of September.

Forecasting service AccuWeather warned Friday of prolonged drought conditions in India, with the monsoon likely to be disrupted by a more active typhoon season over the Pacific.