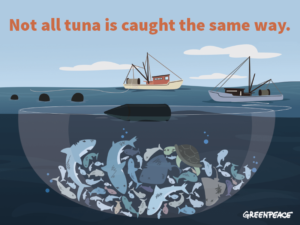 Tuna is in trouble. It’s is one of the world’s favourite ﬁsh, and the staple protein of millions, but it is overfished globally.

The statistics are grim: 3/4 of the world’s fish stocks are being harvested faster than they can reproduce. Ninety percent of all large predatory fish – including tuna, sharks, swordfish, cod and halibut – are gone. Scientists predict that if current trends continue, world food fisheries could collapse entirely by 2050.

Every year there are more boats chasing fewer tuna. There simply aren’t enough fish to sustain the world’s voracious appetite for tuna. Rampant overfishing and pirates stealing tuna are making these once abundant, ocean giants harder and harder to find.

Bigeye and yellowfin are fully exploited or over exploited in all oceans – they are in serious trouble in the Western and Central Pacific Ocean specifically, where they were relatively healthy just a few years ago. Stocks of the magnificent bluefin, the most iconic and valuable of all tuna species, are on the brink of collapse.

And it’s getting worse. Advances in technology mean larger ships – floating factories – are now able to take as much tuna in two days as whole countries can take in a year. Increasing practices of tuna ranching are further aggravating the crisis.

Pirate fishing is also rampant in high value tuna fisheries, literally stealing tuna from the plates of some of the poorest people in the world. But even the legal tuna fisheries are partaking in the robbery. The so called “sweetheart deals” that fishing nations and rich multinational corporations negotiate with coastal states for access to fish tuna in their waters are incredibly unfair. Only around 5% of the value of the tuna is given to the resource owners, often denying coastal communities much-needed employment and neglecting the responsibility to fish responsibly.

How can we stop the tuna from disappearing? Insist on pole-and-line caught or FAD-free, sustainably fished brands.

Where does our tuna come from?

The tuna that’s most likely to end up in supermarket cans at the moment is Skipjack. While skipjack is not yet overfished, if fishing continues at current rates it won’t be able to sustain itself. What’s more, the methods used to net skipjack all too often catch young yellowfin and bigeye tuna, threatening these species further.

Yellowfin, a much more commercially valuable species, makes up 35 percent of the world’s catch. The majestic bluefin only represents 1.5 percent of the landed volume of tuna, but its value is astronomical. In 2001, a single bluefin tuna set an all time record when it sold for US$173,600 in Japan.

Just because there’s more Skipjack than Albacore or Yellowfin, that doesn’t mean we should continue using the harmful fishing practices that take too much and leave too little for communities and smaller fishing fleets.

Everything gets pulled up

Industrial fishing practices mean we can catch fish faster than nature can replenish its seas. 90% of the oceans’ large predatory fish, such as tuna, swordfish, marlin and sharks, have already been taken from our oceans.

One of the most important things tuna brands can do is stop using fish aggregating devices (FADs) with large ‘purse seine’ nets.

FADs act like giant fish magnets. They draw in marine life to be scooped up in a purse seine net. This method of fishing is done at random and without careful judgement. It threatens to wipe out tuna stocks because of the large incidental catch of juvenile tuna from species that are at risk. This level of bycatch, that can also include sharks, rays, and even turtles, can be ten times higher than fishing without FADs.

Often we look out for “dolphin-friendly” tuna to ease our minds about what is inside your favourite can of tuna but just because there is no dolphin IN your tuna, it does not mean that other species were not harmed or killed while your tuna was being fished.

Pole-and-line-caught tuna is the most sustainable way of fishing, and allows communities to still participate in fishing without being bullied by industrial fishing fleets.

Tuna companies and retailers must stop the use of FADs in fishing and seek more sustainable ways, like pole and line.

In Australia, every major brand and supermarket has pledged to end destructive tuna fishing practices and the United Kingdom has seen the likes of John West end their use of F.A.D.s by 2016. It is time South Africa joined the likes of UK, Australia and New Zealand and pledged to only source sustainably caught canned tuna – you can help us make this happen!

What can you do? It’s simple: Choose pole-and-line-caught or FAD-free tuna for your basket and you will be winning for the oceans.

Globally, we must end our use of destructive fishing methods if we are to reverse the decline of our oceans.

Some brands are on the right track

Some tuna brands are taking ocean protection seriously and switching to sustainable fishing methods, such as pole and line, and abandoning the use of FADs with purse seine nets. With pole and line fishing, each fish is individually caught, reducing the impact on tuna stocks and on the level of bycatch. Pole and line fishing also brings more employment opportunities for local fishing communities.

In the UK, the entire tuna industry, and most of the Australian industry, has committed to switch to sustainable tuna methods. There is no reason the South African industry cannot do the same – after all, South African consumers want it.

Greenpeace USA has produced a Tuna Shopping Guide to help consumers make an informed choice and to pressure brands to clean up their act.