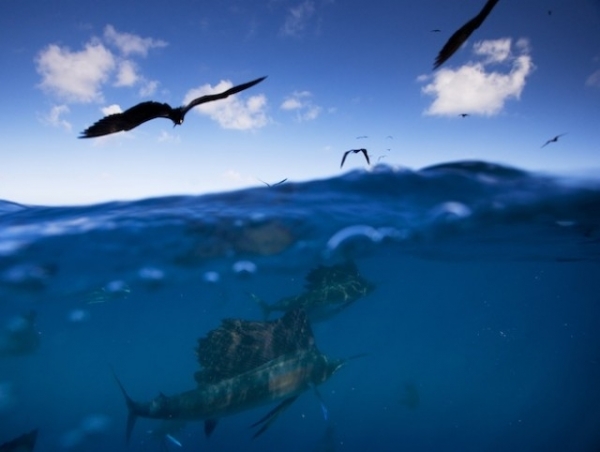 It’s been three years since the BP oil spill, and new truths have come to light – from deep down inside the ocean.

Three years ago, when BP’s Deep water Horizon began leaking some 210 million gallons of Louisiana Crude into the Gulf of Mexico, the U.S. government allowed the company to apply chemical “dispersants” to the blossoming oil slick to prevent toxic gunk from reaching the fragile bays, beaches, and mangroves of the coast, where so much marine life originates. But a number of recent studies show that BP and the feds may have made a huge mistake, for which everything from microscopic organisms to bottlenose dolphins are now paying the highest price.

After the spill, BP secured about a third of the world’s supply of dispersants, namely Corexit 9500 and 9527, according to The New York Times. Of the two, 9527 is more toxic. Corexit dispersants emulsify oil into tiny beads, causing them to sink toward the bottom. Wave action and wind turbulence degrade the oil further, and evaporation concentrates the toxins in the oil-Corexit mixture, including dangerous compounds called polycyclic aromatic hydrocarbons (PAHs), known to cause cancer and developmental disorders.

When BP began spraying the Gulf, critics cried foul. They said Corexit is not only toxic to marine life on its own, but when combined with crude oil, the mixture becomes several times more toxic than oil or dispersant alone.

No agreement on long term effects

Not surprisingly, BP Chief Executive Bob Dudley defended use of the dispersant. “The toxicity of Corexit is about the same as dish soap, which is effectively what it is and how it works,” he told stockholders. “In hindsight no one believes that that was the wrong thing and it would have been much worse without the use of it. I do not believe anybody—anybody with almost common sense—would say waves of black oil washing into the marshes and beaches would have been a better thing, under any circumstances.”

BP says that Corexit is harmless to marine life, while the Environmental Protection Agency has waffled, saying both that “long term effects [of dispersants] on aquatic life are unknown” and that data “do not indicate any significant effects on aquatic life. Moreover, decreased size of the oil droplets is a good indication that, so far, the dispersant is effective.”

But many scientists, such as Dr. William Sawyer, a Louisiana toxicologist, argue that Corexit can be deadly to people and sea creatures alike. “Corexit components are also known as deodorized kerosene,” Sawyer said in a written statement for the Gulf Oil Disaster Recovery Group, a legal consortium representing environmental groups and individuals affected by the Deep water Horizon spill.

Kerosene a health risk to all

“With respect to marine toxicity and potential human health risks, studies of kerosene exposures strongly indicate potential health risks to volunteers, workers, sea turtles, dolphins, breathing reptiles and all species which need to surface for air exchanges, as well as birds and all other mammals.” When Corexit mixes with and breaks down crude, it makes the oil far more “bioavailable” to plants and animals, critics allege, because it is more easily absorbed in its emulsified state.

Sawyer tested edible fish and shellfish from the Gulf for absorption of petroleum hydrocarbon (PHC), believed to have been facilitated by Corexit. Tissue samples taken prior to the accident had no measurable PHC. But after the oil spill, Sawyer found tissue concentrations up to 10,000 parts per million, or 1 percent of the total. The study, he said, “shows that the absorption [of the oil] was enhanced by the Corexit.”

In April 2012, Louisiana State University’s Department of Oceanography and Coastal Sciences was finding lesions and grotesque deformities in sea life—including millions of shrimp with no eyes and crabs without eyes or claws—possibly linked to oil and dispersants.

The shocking story was ignored by major U.S. media, but covered in depth by Al Jazeera. BP said such deformities were “common” in aquatic life in the Gulf and caused by bacteria or parasites. But further studies point back to the spill.

A just-released study from the University of South Florida found that underwater plumes of BP oil, dispersed by Corexit, had produced a “massive die-off” of foraminifera, microscopic organisms at the base of the food chain. Other studies show that, as a result of oil and dispersants, plankton have either been killed or have absorbed PAHs before being consumed by other sea creatures.

Hydrocarbon-laden, mutated seafood is not the only legacy left behind by Corexit, many scientists, physicians, environmentalists, fishermen, and Gulf Coast residents contend. Earlier this week, Take Part wrote about Steve Kolian, a researcher and founder of the nonprofit group Eco Rigs, whose volunteer scientists and divers seek to preserve offshore oil and gas platforms after production stops, for use as artificial reefs and for alternative energy production.

A great way to get ‘stuck stupid’

EcoRigs divers took water and marine life samples at several locations in the months following the blowout. Now, they and countless other Gulf residents are sick, with symptoms resembling something from a sci-fi horror film, including bleeding from the nose, ears, breasts, and even anus. Others complain of cognitive damage, including what one man calls getting “stuck stupid,” when he temporarily cannot move or speak, but can still hear.

“If we are getting sick, then you know the marine life out in the Gulf is too,” Kolian said. The diver and researcher completed an affidavit on human and marine health used in GAP’s report.

Kolian’s team has done studies of their own to alarming results. “We recently submitted a paper showing levels of hydrocarbons in seafood were up to 3,000 times higher than safety thresholds for human consumption,” he said. “Concentrations in biota [i.e. all marine life] samples were even greater.”

Kolian’s friend and colleague, Scott Porter, described in his affidavit to GAP how Corexit had caused dispersed crude to coat the bottom of the sea in a sickening, deadly film. In July 2011, he and other divers travelled to a part of the Florida Panhandle, known as the Emerald Coast for its pristine seawater, to collect samples for the Surf rider Foundation.

“When we went diving, however, the water had a brownish white haze that resembled what we saw in offshore Louisiana at 30 feet below sea level,” Porter’s affidavit stated. “I have never witnessed anything like that since I began diving in the Emerald Coast 20 years ago. We witnessed…a reddish brown substance on the seafloor that resembled tar and spanned a much larger area than is typical of natural runoff.”

In areas covered with the substance, “we noticed much less sea life,” Porter continued. “There were hardly any sand dollars or crabs and only some fish, whereas we would normally see an abundance of organisms. It was desolate.”