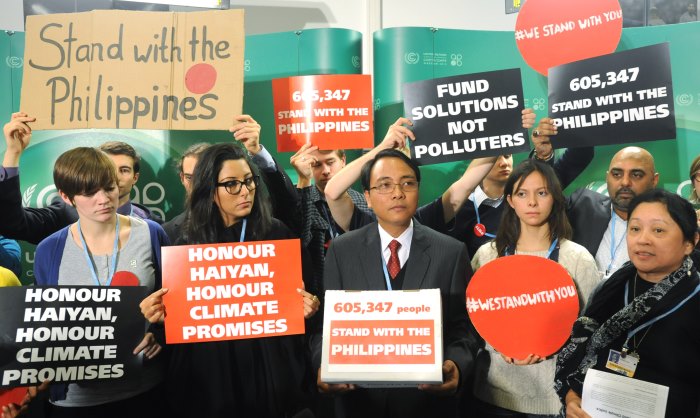 Phillipine delegate for climate negotiations Yeb Sano delivers his global Avaaz petition to delegates at the UN Climate Conference in Warsaw, backed by over 630,000 citizens around the world and climate activists calling for urgent action to prevent more super Typhoons like Haiyan, in Warsaw, Poland Tuesday, Nov. 19, 2013. (Alik Keplicz/AP Images for Avaaz)

Elma Pollard and the Green Times has joined the Climate Fast on the first day of every month to stand with thousands of others fasting for action on climate change. A growing movement of youth, environmentalists and people of faith are showing their strength of commitment by going without food once a month to call for world leaders to do more to solve the climate crisis.

Why fast for the climate?

We Fast for the Climate to send a message to governments that people from all walks of life, from all corners of the globe, and from all faiths and creeds expect climate action. We demand a just transition to a safe climate future. To achieve this, we call for:

Already, millions of people have lost their homes and their livelihoods as a result of climate change. Yet government action remains profoundly inadequate and fails to secure the benefits a clean energy revolution would deliver for people and the planet.

The time to solve the crisis is now. 2015 is a unique opportunity to set the world on track to a safe climate future. We expect countries to cut carbon pollution and to secure a renewable energy supply by 2050. We want individuals to continue to lead the way by adopting climate solutions through their own consumption. We expect richer countries to help poorer nations reduce their own pollution and adapt their communities to climate impacts, while we urge all world leaders to work together in order to ensure the planet is a safe and better place for future generations.

Fasting opened my eyes and brought me closer to my neighbours

“Fasting made climate change real for me, opened my eyes and brought me closer to my neighbours. This is one of the reasons why fasting once a month is interesting: it raises one’s awareness on a regular basis and not only when extreme weather events happen. As long as you share your commitment around you, you help raising awareness about climate change. And that is, after all, what makes your fast matter.” — Martin Kopp, LWF delegate to COP19 from France.

When Typhoon Haiyan/Yolanda had just devastated the Philippines in November 2013, then climate commissioner Yeb Saño was at the UN climate talks in Warsaw. His own family was caught up in the disaster that killed thousands and destroyed homes and livelihoods across the country.

In a moving speech, Yeb said he would not eat until the Warsaw conference ended or delivered actions that would ‘stop the madness’ of the climate crisis. So long as the people he represented could not eat, nor would he.

Hundreds of others from around the world chose to fast with him in solidarity.

Despite this, the Warsaw meeting saw countries actually winding back their climate commitments, seemingly in denial that all countries will need to commit and contribute to the comprehensive, global climate action plan which is due in Paris in 2015.

The Fast For The Climate has grown into global movement with participation of youth groups, environmental groups and faith-based groups, who all want urgent action on climate change by governments this year.