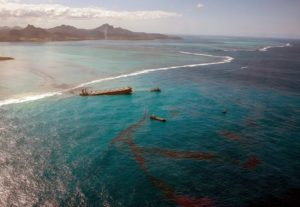 The arrival of the Deepsea Stavanger oil drilling rig in Cape Town yesterday has many people concerned about the risks that come along with it, especially as the current oil spill disaster in Mauritius (SA’s backyard, photographed to the right) continues to wreak havoc. It is with this in mind that The Green Connection – an NGO working to support and empower local communities along the country’s coastline – calls on government to listen to the people and halt all further oil and gas exploration activities.

Total E & P South Africa are seeking a permit to drill an additional 10 wells, 40 to 110km south of Knysna and Mossel Bay, in water depths of 600 to 2000m. Oil spills from this offshore drilling could affect the Tsitsikama and Wilderness National Parks and many fish breeding areas.

The Green Connection’s Liziwe McDaid says, “What is happening to Mauritius is devastating. It could take decades for the ocean and the life it holds, as well as the affected Mauritian communities to bounce back, if they ever will. This should not be happening in 2020, with all we know about the devastating impacts of fossil fuels, which we continue to witness and experience, first-hand.”

“South Africa’s oceans are fundamental to the livelihoods of many people, including small-scale fishing communities, all along the coastline. Yet our governments and big corporations seem to ignore all the negative impacts to life, willing to sacrifice the wellbeing and livelihoods of the masses to enrich a few. This is why we emphatically reject oil and gas drilling and any further exploration. It is NOT for the greater good. And, since no technology is foolproof, South Africa – which we know is in no position to deal with any major catastrophe – would be wise to start moving away from these projects, before all our natural resources are contaminated and damaged,” says McDaid.

The Green Connection and its community partners, call on the South African government to halt all offshore oil and gas. Offshore oil and gas drilling is the process of drilling holes in the ocean seabed of the continental shelf or in lakes and inland seas. Up to now, there has been no meaningful public participation on these issues.

The Green Connection’s Neville Van Rooy says, “While Minister Gwede Mantashe may be celebrating the arrival of the oil rig, for South Africans this is a bad omen for a looming catastrophe. As we witness what is happening to Mauritius, we need to be aware that this could easily happen here too. Should we not first understand how all this drilling will affect the livelihoods of the people, especially those who rely on the ocean for their living?”

Mr. Ntsindiso Nongqcavu Chairperson of Coastal Links Eastern Cape says that the community-based organisation – which helps small-scale fishers secure their livelihoods and their human rights – does not support oil and gas drilling in the ocean. “The South African government must consult us directly, not using online consultation. We as fishers do not have access to online public participation processes and we need to participate fully because their plans will affect us. Our lives. If government goes ahead without us, it will cause trouble for us. We need fish, not mining.”

“Mining kills the very environment that we live with. In my view, the government of South Africa must learn from other countries that have many problems now, as a result of oil and gas mining. Stop Operation Phakisa! We do not agree with it. We do not know what the destruction that it may cause,” adds Nongqcavu.

Christie Links, a small-scale fisher in Saldanha Bay says, “The people who are making decisions about the ocean are people who seem to have no clue about the ocean. They have not relied on the ocean for their livelihoods, whereas fishers and the species that they seek, could all be affected. This is our place of work. If these areas are damaged as a result of oil pollution, where will we work? This will cause even more issues for us.”

Carmelita Mostert, from Langebaan says that fisher communities around the country should stand together and take the authorities to task.

“The Department of Agriculture, Forestry and Fishing will have to take responsibility for the ongoing ocean grabbing, which further disadvantages the many small-scale fishers around the country.”