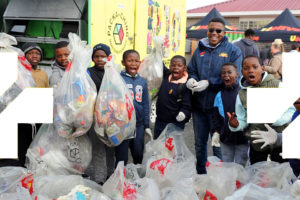 One of the best motivating forces for recycling plastic waste comes from the income opportunities that it creates. This is why South Africa has such a large sector of informal waste pickers – citizens that collect plastic recyclables from landfills and other waste streams and sell them to recycling companies for a profit.

Waste management is an important part of society. Recycling waste not only prolongs the lifespan of plastics, but it also unlocks the value of refuse and boosts the economy. As such, a number of municipalities in South Africa are partnering with various organisations to improve waste management in these communities.

One such example is Bushbuckridge Municipality in Mpumalanga, which recently partnered with the University of South Africa (UNISA) to launch a recycling programme that will empower local residents. The programme is aimed at improving residents’ knowledge about recycling, formalising income-generating opportunities from recycling plastic waste and minimising environmental pollution caused by litter.

The goal of the partnership was to develop a manageable and affordable solution for recycling in Mpumalanga. “It’s a municipality’s responsibility to address waste management issues within a society,” says Bushbuckridge Municipality waste management manager Levy Mokoena.

“Unfortunately, as a rural municipality, we generate limited revenue – which limits our waste management efforts when it comes to reaching certain parts of our jurisdiction,” he explains. “Our mission, in partnership with UNISA, is to support existing recyclers by making them realise the potential of a clean, healthy environment and opportunities to earn an income,” says Mokoena.

Government support will also help to maximise the income-generating opportunities that exist within the recycling sector. “Many recyclers have given up on their efforts because of the small amounts of money they received, unaware of the great financial potential that recycling offers,” says UNISA associate professor in environmental issues Fani Machete.

Businesses can play a role in local recycling initiatives

Businesses operating in South Africa can also support a formalised recycling industry. Polyco, a local organisation that focuses on Polyolefin plastics recycling and recovery, has been running a campaign called ‘Packa-Ching’. A recycling truck and trailer parks in designated communities on a weekly basis, where residents can sell their recyclable waste.

Community members can sell their plastic, paper, glass and metal waste to the truck driver. The waste is weighed and the prices for the materials are set according to current market values. Residents are paid into their eWallets without delay. These recyclable materials are loaded into the trailer and taken to local recycling facilities. Packa-Ching is aimed at making recycling more convenient and adding monetary rewards for separating recyclable waste in households.

Another business-led initiative has been started by a multinational brewing and alcoholic beverage company, Distell. The company launched a local recycling project called ‘GreenUp’. Distell partnered with an organisation called Separation at Source (S@S) to launch the project in Khayelitsha, Cape Town.

GreenUp aims to establish formalised and effective value chains when it comes to the collection, separation and processing of plastic recyclables in Khayelitsha – home to around 450 000 residents. GreenUp will implement collection points and formal agreements between waste pickers and the buyers of recyclable waste in the area.

This will help to promote the sustainability of the local recycling sector, a well as to boost the employment opportunities in Khayelitsha. “By partnering with S@S in formalising networks or value chains in Khayelitsha’s waste management efforts, we also aid in combating socio-economic challenges, empowering individuals within this fast-growing community,” says Distell sustainability manager Eric Leong Son.

Recycling is a big industry in South Africa yet the jobs remain largely informal. Officially, the industry supports 7890 formal jobs but it is estimated that around 58 470 South Africans receive an income through the entire recycling supply chain. These income-generating opportunities are significant and they can be boosted with the help of the government and business sector.