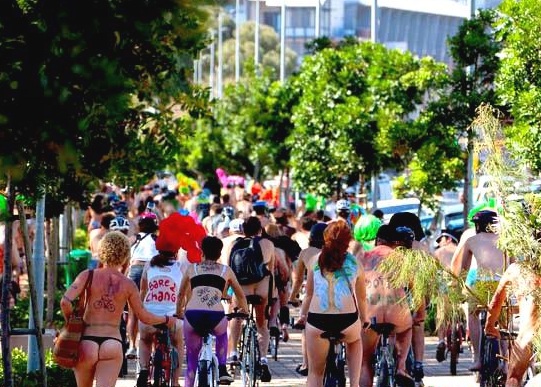 The World Naked Bike Ride is a global event. Cape Town joined the ranks of participating cities in 2011 with a smashing debut of a ride. Approximately 150 riders joined us on a beautiful day and the vibe was carnivalesque. 2012 and 2013 were also huge successes with about 250-300 riders and again a fantastic atmosphere.

The date for 2014 has been set by the global committee: Saturday 8th of March… It’s perfect timing, being the day before the Argus Cycle Tour… so no excuses, oil your chains, dust off your saddle, take off your clothes and join us to make a statement!

Don’t get left behind

The ride will start at 10am, so please get to Prestwich Memorial a little bit earlier so you can get yourself ready and don’t get left behind!

This ride is not about nudity – it’s about joining in a world wide campaign/protest for the environment: we ride for cleaner energy, less reliance on fossil fuels, and to encourage more people to cycle!

A celebration of the bicycle & the human body

The event is a peaceful, imaginative and fun protest against oil dependency and car culture. It is a celebration of the bicycle and also a celebration of the power and individuality of the human body. Furthermore, it is symbolic of the vulnerability of cyclists in traffic and the Naked Bike Ride Team wish to create awareness of this fact.

Additionally, this cycle ride will mean Cape Town is part of the world’s biggest naked protest: 50+ cities and thousands of riders participate worldwide.

Since 2004, cities across the world have experienced the joy of the world’s largest naked event that seeks to create environmental awareness through clean initiative such as cycling. We would like Cape Town to join in this awareness campaign.

“As Bare As You Dare”

What to wear? Do not fear! The World Naked Bike Ride dress code is “As Bare As You Dare”… How bare is that? How dare is that? It’s all up to you. You decide what you are comfortable with. No one is excluded or discriminated against based on levels of clothing, bodypaint, or anything else for that matter!

This naked cycle underpins massive global issues: The Naked Bike Ride Team and participating cyclists would like to share bare knowledge about the vulnerability of cyclists on Cape Town’s roads, stressing the need for drivers to recognise and respect cyclists and most importantly co-habitate with people getting around on bicycles.

Furthermore, Cape Town suffers from an embarrassingly high per capita carbon foot print. This initiative to reduce pollution is a central purpose in holding the first ever naked cycle ride in Cape Town. Other more permanent ways we can address this fact is by calling for non-motorised transport awareness campaigns, more bicycle parcours in Cape Town and by asking Metrorail to allow bikes on the train.

The event is open to all Capetonians, young and old, fit and not so fit; the idea is to engage the public and make a statement. We paint our bodies and decorate our bikes with messages of protest or beautiful designs to complement our varied forms and diversity.

Some useful slogans are:

It is time to halt the indecent exposure of people and the planet to cars and the pollution they create!