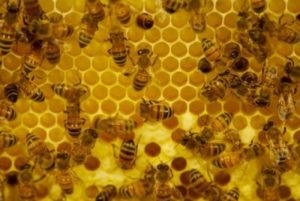 ‘Honey has been waiting for almost ten million years for a good biography. Essential to the food, drink, religion, economics, medicine and arts of every civilization since the Egyptians, honey – and the bees that make it – have been a vital part of the human record for millennia.’

This is the back cover blurb for Holley Bishop’s book, Robbing the Bees, published in 2005. During the short life of this book, more and more questions are being asked about the survival of the bee and what can be done about it.

The Internet, as well as global newscasts, has changed the way people look at the world. When the Chilean miners were saved, it was on everyone’s lips, even in remote places where people do not even know where Chile is! In a similar vein, people the world over are talking about the drop in the numbers of bees.

Someone might come across a pile of dead insects and conclude that what they saw on the news, perhaps something that was reported in America or Germany, is happening in South Africa, too. According to William Urquhart, acclaimed beekeeper in the KwaZulu-Natal Midlands, South African bees are not in danger of extinction.

The scenario in America is completely different. Honeybee losses of up to 33% have been reported during interviews with approximately 4 000 beekeepers.

The problem was called Colony Collapse Disorder and its cause may be attributed to a whole list of factors, divided into four main categories:

Similar stresses are however experienced by the bees in South Africa.

Two important factors play a role here. Unemployment in South Africa has led to theft. Thieves have learnt how to avoid being stung (using smokers, or working at dusk or are ‘machos’ for having been stung) and end up vandalising and stealing, not only the honey, but the hive as well as the bees. In Gauteng, losses such as these are about 25% per annum, according to Urquhart.

Wild swarms are vulnerable to this problem as well, since baboons and, to a much lesser extent, honey badgers rob the bees, too. Some beekeepers surround their hives with electric fences, others use chains and padlock the boxes.

The drought that has seen many a lawn shrivel to mini-deserts during the spring of 2010 in many parts of the country also affected bees. Eucalyptus trees, a major source of nectar, produce less during the hot, dry seasons and plenty of flowering plants have not appeared because of the drought. This seasonal problem has only recently arisen. A longer-term problem is the vast tracts of land used for agriculture: reducing the surface area where bees can forage naturally.

Trucked and expected to thrive

In America, bees are used to pollinate almond trees, which prosper in desolate areas. Since bees do not occur naturally here, truckloads of bees are transported to the farms and the bees are expected to thrive. According to A World without Bees, a 78 000ha almond farm would need up to 200 000 hives to pollinate the almonds. Since the bees could be on the road for five days in a row, they experience a fair amount of stress and are fed artificially.

In contrast to South African beekeepers, that tend not to treat the hives with antibiotics or insecticides (to get rid of mites), the Americans treat their hives. Mites enter the hives and the bees’ immune systems give way. Urquhart concludes that the bees are expected to adapt much faster to these conditions than Mother Nature intended and that this is ‘bee abuse.’

In addition, farmers protect their crops against dangerous pests and apply pesticides, fungicides, herbicides and rodenticides … forgetting that beneficial insects, such as the bee, suffer as a result. The list of pesticides that affects bees is fairly long, although pyrethroids and organophosphates are the most important (the combined effect of these chemicals still needs to be investigated).

Pesticides that are nicotine-based do not kill the bee, but confuse this social creature. The poison affects the bee’s brain and it forgets how to navigate home, causing the number of bees in the hive to drop. Since there are fewer workers to bring the food the immature bees need, the colony could collapse. Most toxins are labelled as to how and when they should be applied, reducing the danger to bees. It seems many users tend not to follow the application directions.

Radiation from a wide range of the latest electronic devices also has its disadvantages. Cellular phones, GPSs and other gadgets are being used by more people than ever before and scientists cannot tell for sure what their impact on the environment (or insects) is.

All deciduous fruit and sunflowers and legumes such as soybeans and lucerne need pollinators for the crop to mature. The term ‘pollinators’ is used instead of ‘bees,’ because bees only make a contribution to the pollination process. According to Prof. Andrew Watkinson (USA), honeybees contribute 10% to this process. In contrast, the South African general manager of Delicious Fruit says 95-98% of the pollination that takes place is due to bees.

Birds, moths, hoverflies and wasps are but some of the 250 potential pollinators of a crop. Many of these crops are being genetically modified in the hope of reducing pesticide use. Botanists are introducing a naturally occurring toxin (Bt) into crops to make them insect-repellent. Bees remove the pollen from such plants and so it enters the hive.

Researchers are unable to tell what it does to the bees: The pollen definitely does not kill them, but it could reduce their immunity to disease (e.g. American Foul Brood or AFB). It also seems that research is mainly done on the adult bees and the effects of the toxin on bee larvae are not thoroughly investigated.

Diseases and parasites: afb and varroa

In South Africa, bee diseases have been kept to a minimum, according to Mike Allsopp (nationally the only governmental bee researcher), by allowing the bees to build up their own immunity. Beekeepers abroad tend to apply antibiotics when their bees show signs of bacteria and/or fungi that affect bees.

Sadly, AFB is becoming more and more prevalent in South Africa. It is a bacterial disease that targets immature bees and is mostly noticed too late to do anything about it. A parasite known as the Varroa mite seems to be a major distributor of AFB. This mite enters the bee colony and sucks the larvae dry. AFB entered South Africa through imported honey that was not tested properly and might still completely ruin the industry.

In addition to making money from honey, beekeepers lease their bees to farmers in order to pollinate their crops. Moving the bees around too often has negative effects on the bees and could lead to their demise. A related problem here is that the more the bees are moved around, the more likely they are to either contaminate other bees (should the colony be unwell) or pick up diseases and parasites at the new sites.

This is also where the two bee sub-species in South Africa come into conflict. The Cape worker bee produces a pheromone like that of the African queen bee. As the colony is moved around the country, different bees have contact with each other and a Cape worker bee could make its way into an African beehive. Since the African worker bees cannot have two queens, they kill their queen and nurture the non-egg laying Cape worker bee, until the colony dies out.

Lack of funds for research

Researchers investigating the decline of bees across the globe do not actually know what the problem is. Internationally there seems to be money to pour into improving GM foods and pesticides, but none to fund bee research. As Prof. Hans-Hinrich Kaatz (Germany) states:

Asked if bee populations are really dropping, or if there really seems to be a problem, most scientists would say yes.

Germany reports a 25% drop in bee populations and Denmark 30%. Italy, too, has a figure, as does France, and some speculate about the bees in China (where many of the bee diseases originate). The time frame (per year/season) of these statistics is not given. Researchers and beekeepers cannot explain the way Colony Collapse Disorder occurs, as no single factor can be pinpointed as the cause.

As Holley Bishop points out bees and their honey have been with us and helped us to survive for millennia. It is tragic that a species that has survived this long should be exterminated by modern man ‘Robbing the Bees’ to death. If one is to believe Albert Einstein: If the bee disappeared off the surface of the globe then man would only have four years of life left. No more bees, no more pollination, no more plants, no more animals, no more man. This scenario has serious implications.