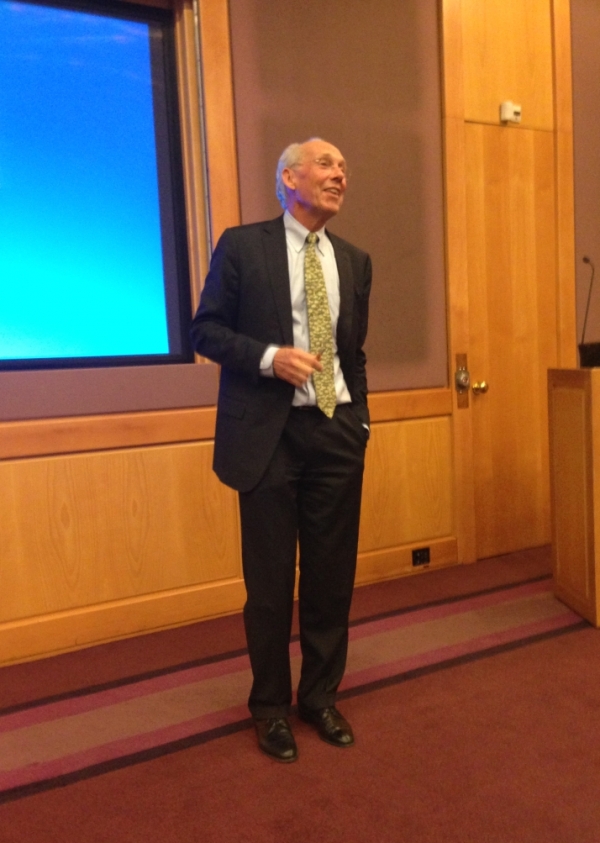 It’s not too late to avert a climate crisis but “pervasive human short-termism” makes it highly unlikely that society will do so in the next 40 years.

“Starvation of the poor is one of the inevitable consequences predicted, if we continue to live in a democractic system, where the major focus is on short-term gratification and crafting the best possible life for yourself,” said leading economist and sustainability pioneer Prof Jurgen Randers in Cape Town last week.

Prof Randers is a leading economist and professor of climate strategy at the BI Norwegian Business School, who was invited by the University of Cambridge Programme for Sustainability Leadership South African office. 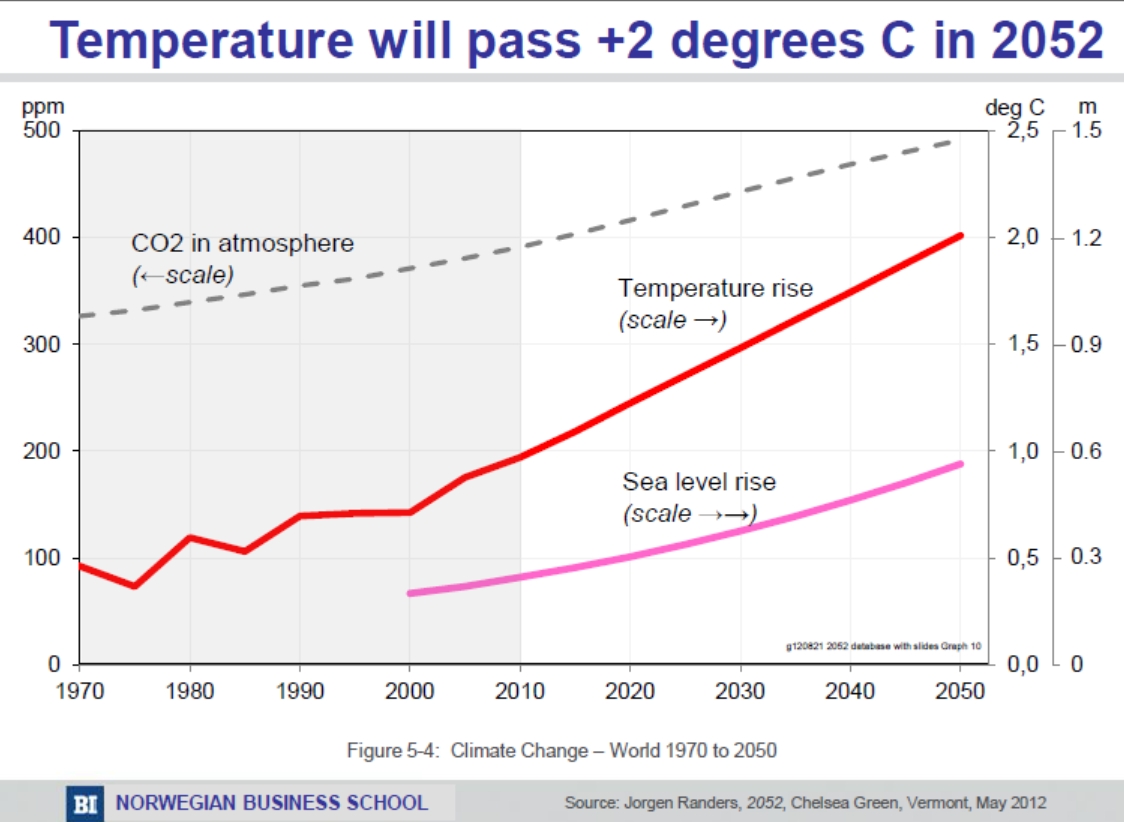 In this world, Randers is no stranger to forecasting. As co-author of the famous 1972 book The Limits to Growth, he participated in one of the most ambitious forecasting exercises of the last 40 years creating 12 scenarios for what the future of the planet might look like 100 years into the future. Although the book became a best seller, it was widely criticised. However, almost all the predictions that it made have since come to pass.

Randers said he was tempted into embarking a second forecasting exercise, published in his new book 2052: A Global Forecast for the Next Forty Years, partly for selfish reasons “I wanted to know what the world would look like as I get older,” and partly because he “couldn’t resist the temptation to deliver a final kick in the ass to society in the hope that this might move them to do something.”

“We already live in a manner that cannot be continued for generations without major change. Humanity has overshot the earth’s resources, and in some cases we will see local collapse before 2052 – we are emitting twice as much greenhouse gas every year as can be absorbed by the world’s forests and oceans,” warned Randers.

“Action is necessary, it is desirable!” According to Randers the kind of action required is “extraordinary.” “Ordinary action won’t work, it has already been worked into my scenarios,” he said.

“It is for the rich world to tackle this problem. We have chosen to let the system become unsustainable, this was NOT done through economic necessity,” he said. “The momentum is so strong that we know what will happen over the next 40 years.”

So, what is Prof Randers predicting about the ‘not rosy’ future of civilisation? 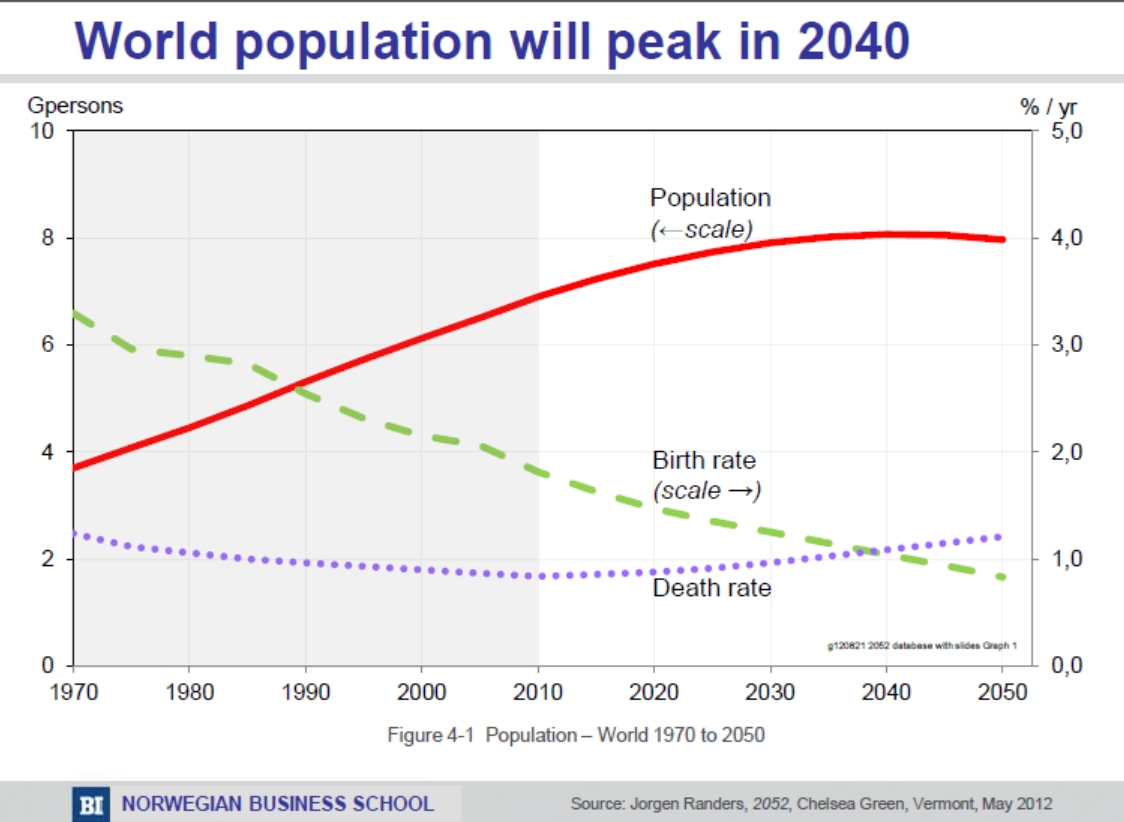 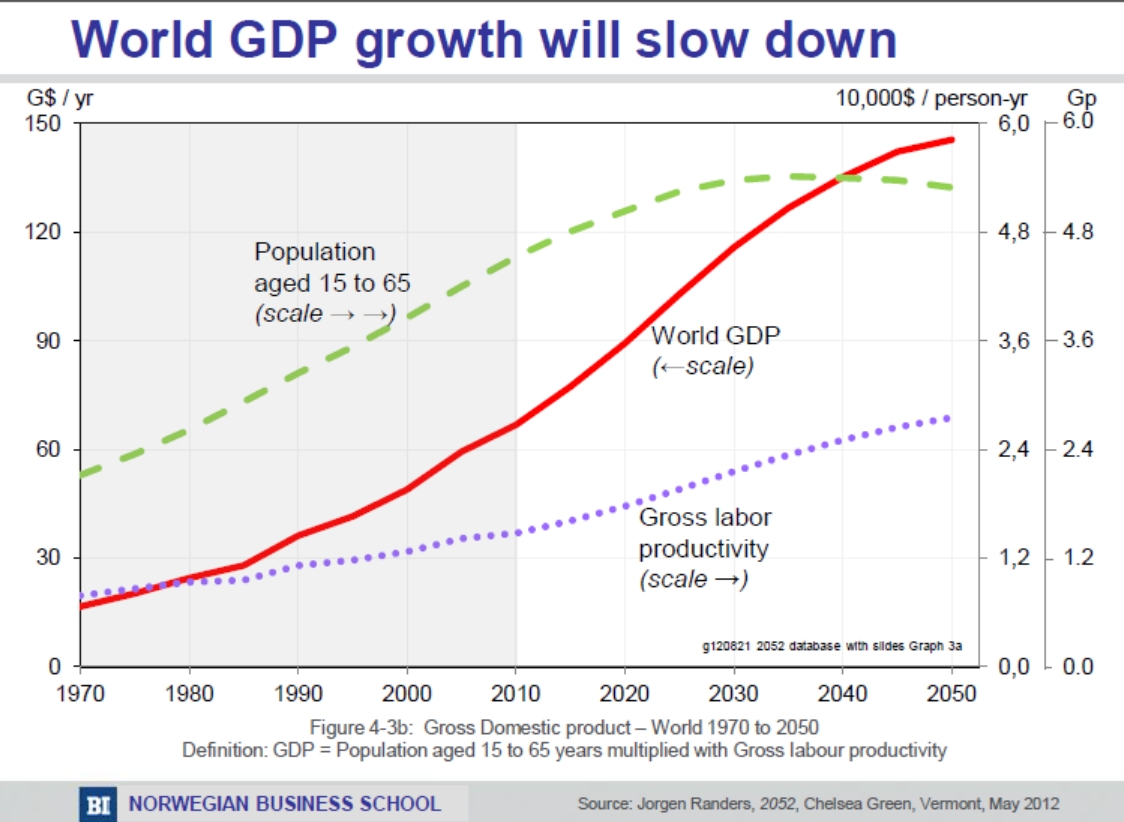 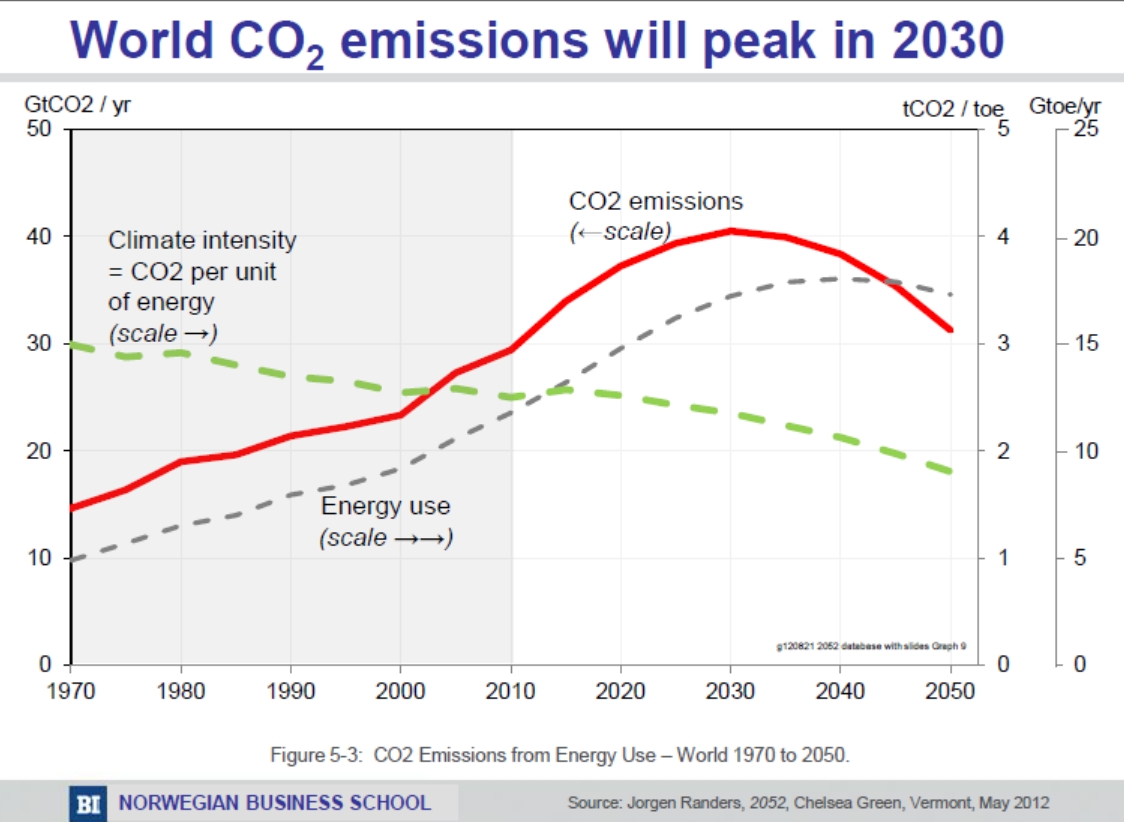 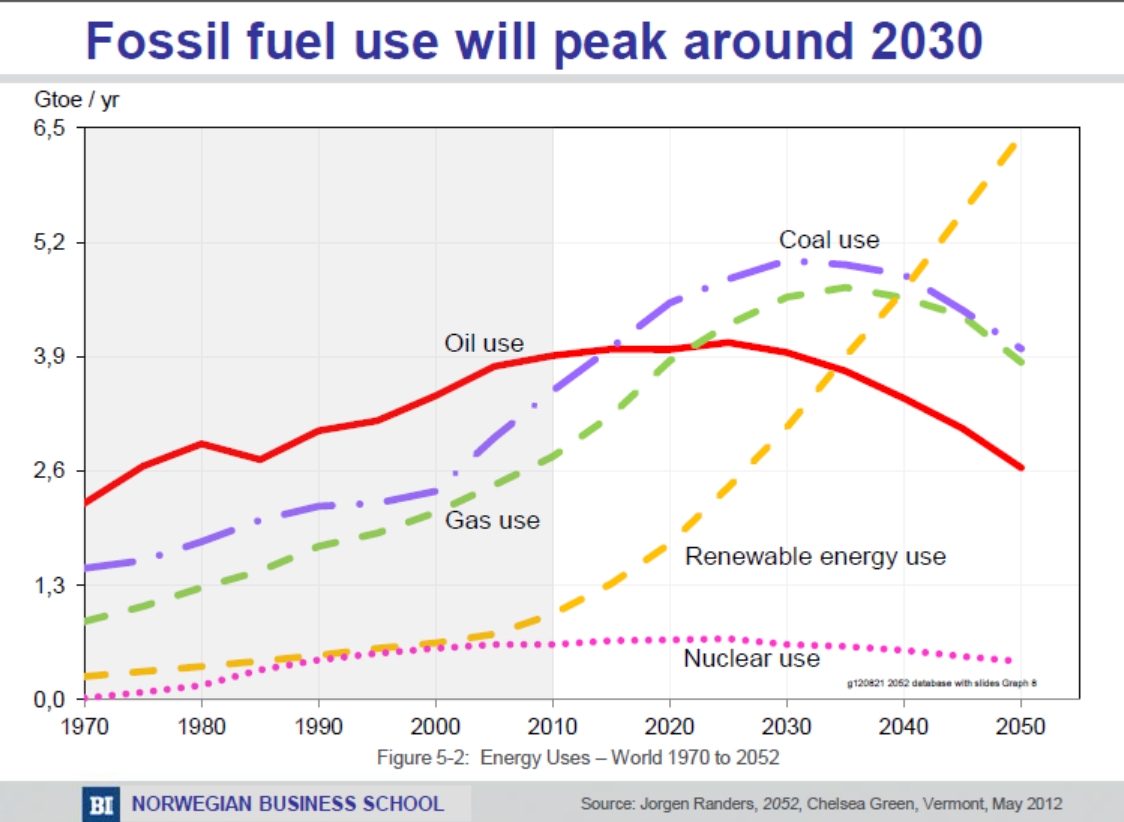 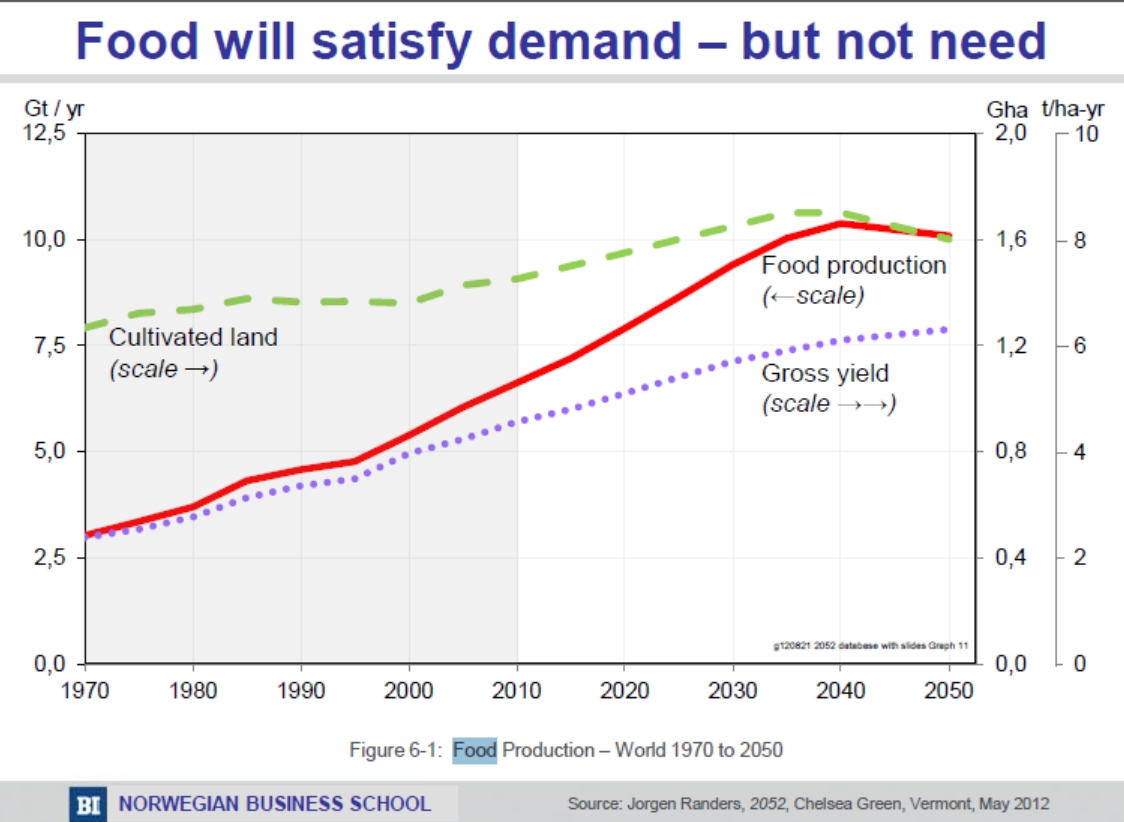 No, we will not listen

Having delivered this grim picture, the audience was keen to have the good Prof deliver some possible solutions to avoid such a picture from manifesting in the future. Normally, he said, he doesn’t discuss solutions. However, as there is such a big need wherever he goes, he now ventures to offer some solutions. As long as everyone understands that he knows this will not happen – the world is NOT going to take this issue seriously and implement the necessary changes he said.

Although the technologies exist and the costs to do so are not exorbitant, the world’s leaders are incapable of taking the necessary action to secure a more sustainable future for human civilisation.

“Although it is relatively cheap – if humanity chose to use available technologies to reduce the emission of greenhouse gasses the cost would amount to 1 or 2% of GDP – it is still more expensive than doing nothing,” said Randers. “Human short-termism therefore prevents us from doing anything. It is difficult to get people to make sacrifices today for an uncertain future.”

“We could transfer labour from the dirty energy industry across to the clean sector, get the guys who are building coal stations to build windmills. If implemented world-wide, this will facilitate the needed shift,” he said.

Capitalism is costing our future

“Democracy means that decisions will not deviate from the short-term view, hence we can make our forecasts. Sad but true,” he said.

“So the climate problem will not be solved simply because we choose not to solve it,” he said. “Humanity is in the process of postponing action until it is too late. Not too late that the world will come to an end, but so late that our grandchildren will have a harder life than if we had acted decisively today.”

The data available to support his predictions is abundant and extremely clear.

“And this paints a relentless picture of the future that is difficult to ignore.”