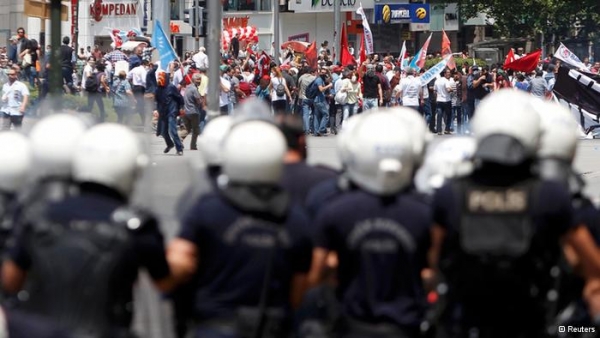 Turkish Prime Minister Recep Tayyip Erdoğan has sought to end the protests against his government with a mixture of duplicity and brutality. He is being aided and abetted by the leaders of the protests, who are playing into his hands.

The mass demonstrations against Erdogan’s Islamist Justice and Development Party (AKP) government began in Gezi Park in Istanbul in opposition to government plans to bulldoze the park and replace with a retail centre. The park has since been occupied by protesters.

On Friday, Erdogan delivered a speech to regional AKP functionaries, saying he was awaiting a court decision on the fate of the park. If the ruling was positive, he said, the Istanbul authorities would hold a referendum on the park.

At the same time, he repeated his warnings about foreign secret services and illegal organisations exploiting the protests.

He had previously met in the capital, Ankara, accompanied by high-ranking government officials, with several artists and members of the architectural and engineering professional organizations, who were designated as representatives of the protesters.

The main result of the meeting was a statement that the prime minister would respect the decision of the court regarding the construction plans. What should be a matter of course in a state based on the rule of law was presented by the media and the delegation representing the demonstrators as a concession. The negotiators for the protesters declared in the early hours of Saturday, after the meeting, that Erdogan’s pledge not to push ahead with plans to develop Gezi Park until the court had issued its ruling was a positive sign.

Not above lying to get folks on his side

On Saturday, Erdogan spoke before hundreds of thousands of his supporters in Ankara. He attacked the protesters once again as conspirators, traitors and hooligans. To whip up his supporters, he did not shrink from lying, telling them that the demonstrators had forced their way into a mosque wearing shoes and drinking beer and had daubed slogans on the walls. In reality, some of those injured by the police had been allowed into a mosque with the permission of the Imam in order to receive treatment.

Erdogan issued an ultimatum to the protesters. “Tomorrow, we will hold our meeting in Istanbul,” he told jubilant AKP supporters. “I am saying clearly: Taksim Square must be cleared, otherwise the security forces of this country will know what to do.” He added that his forces would speak to the protesters “in a language they understand.”

Police and security forces moved in Saturday evening, when many families and children were present. Turkish media reported Sunday that the government had sent armed gendarme units to reinforce the police on the streets of Istanbul.

Virtually without warning, the police deployed water cannon and tear gas, firing directly at protesters. They also used truncheons and rubber bullets. The city authorities cleared the protest camp and tore down tents.

Tens of thousands turned out in a spontaneous show of opposition to these attacks. There were clashes with the police throughout the night.

The police did not hesitate to use tear gas inside hospitals and hotels where the injured had been taken. Doctors and lawyers spoke of hundreds of seriously injured. Doctors providing first aid sent warnings via Twitter that a chemical had been added to the liquid in the water cannons, leading to first degree burns. 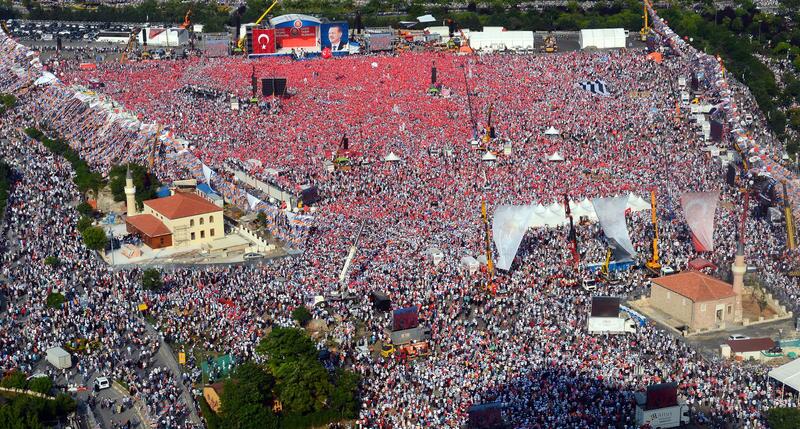 New demonstrations broke out throughout Turkey on Sunday, against which tear gas and water cannon were again deployed. Both supporters and opponents of Erdogan plan to hold large-scale demonstrations in Istanbul.

The AKP government is emboldened in its arrogance and brutality by its support from the US and other imperialist powers. The Islamist regime is a favorite of international capital and is seen as an outpost of Western imperialism.

With sinister allusions and anti-Semitic undertones, Erdogan accused the demonstrators of being part of an international “interest lobby” that is seeking to damage the Turkish economy. In reality, Turkey’s economic growth, to which the government continuously points with pride, is based mainly on an inflow of international, mostly speculative, capital. In the long run, this cannot be maintained without massive attacks on the Turkish working class.]

Geo-strategic importance of Turkey for US rises

The political forces dominating the protest movement are an obstacle to developing serious opposition to the Erdogan government. Organizations such as the Freedom and Solidarity party (ÖDP) and the Labour Party (EMEP) support the Kurdish nationalists of the Peace and Democracy Party (BDP) and Kurdistan Workers’ Party (PKK), who do not wish to endanger their accord with the AKP government. Mustafa Karasu, a leader of the Kurdish Communities Union (KCK), a political front for the PKK, declared that a majority of the population of Turkey was “infected with chauvinism and hostility to the Kurds.”

The Kemalist Republican People’s Party (CHP), the largest opposition party, its members in the professional bodies, and Stalinist groups like the Communist Party of Turkey (TKP) and the Workers’ Party (IP) all spread secular Turkish nationalism. “Left” trade unions such as the Confederation of Revolutionary Trade Unions of Turkey (DISK) and the Confederation of Public Workers’ Unions (KESK) have also done their part in isolating the protesters from the Turkish working class.

Only when the working class intervenes into events as an independent force will the conditions emerge for a serious offensive against the regime. This requires a break with Turkish and Kurdish nationalism and the pseudo-left groups and trade unions, and the building of a new party.