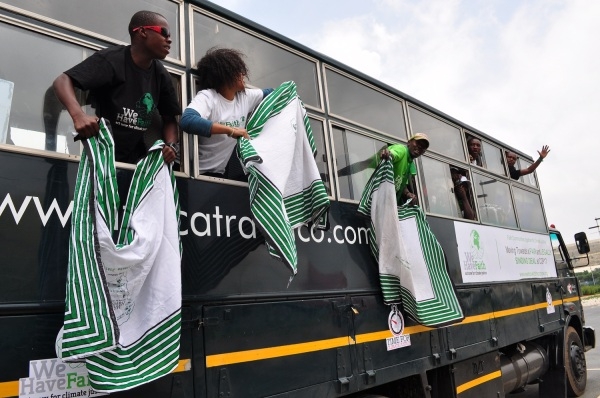 Zambia, Uganda, United States of America, Canada, Cameroon, Kenya and South Africa. These countries were all represented in one room to make their voices heard in the fight against climate change.

Though the 17th Conference on Climate Change (COP17) is only starting on Sunday, 28 November in Durban, a group of passionate youth from around the world created their own platforms to address their concerns about climate change.

During its last day in Gauteng, the Climate Train was host to 150 youth from around the world and Gauteng MEC of Agriculture and Rural Development at the Nasrec Station.

It’s been a long and tiresome journey to South Africa, but the  Act Now for Climate Justice Campaign and the youth caravan made their way in large numbers to the station to meet the MEC to spread their message for climate justice. The Pan-African movement of people, faith communities, faith leaders and 150 youth are on a three week long road trip throughout Africa to share the need for a just and robust outcome of the climate negotiations at COP17.

On their travels through five countries, they hosted a series of events, concerts, rallies and actions linked together by a convoy of buses travelling from Kenya to bring the message across that COP17 must deliver a fair and ambitious climate treaty that secures the future.

Nancy Njeri (22) from Kenya said this project has been a dream come true for the youth of Africa. 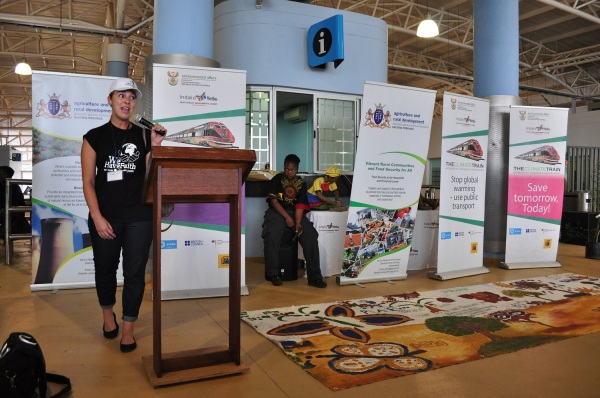 Youth teaching each other

“This project was conceptualized by the Kenya Youth Climate Network and together with NGO’s and faith based organisations we decided that this would be the perfect time to travel through Africa and raise awareness about climate change as COP17 is being hosted in SA for the first time.”

She said the aim of the caravan is to sensitize youth and get them to act on climate change.
“We as the youth are the future and most vulnerable to climate change, so it is vital that we reach as many people as possible so that they are empowered,” she explained.

Through 15 countries for climate awareness

Alphazard Gitau Ndungu (21) who has been on the caravan since its departure in Nairobi the 7th November, said although it’s been a tiresome journey, filled with challenges, it has opened the door of possibilities. “The caravan is a fusion of 18 different cultural backgrounds, but the diversity has made us all realise that a global youth movement is possible. If we all come together in one voice, change is possible, irrespective of language, religion or background.”

Alphazard said the time to act is now. 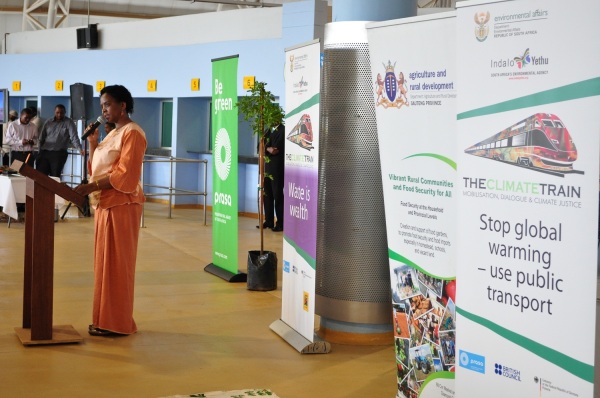 Dried up rivers and starving communities

“We’ve seen countless dried up rivers along the way, we’ve seen communities starved and deprived of food because of draughts. Before the trip I witnessed the first environmental refugee camp in Dadaab, where babies and adults alike died of dehydration and starvation. Climate change is reality and no matter how much government tries to run from it, it will creep up on us and destroy us all if no action is taken,” he said.

According to Clair Morris from the United Kingdom her experiences with climate change has been very different to that portrayed in the media.

“We’ve met some of the most effected people and witnessed their dire situations, but it’s been amazing to see that despite their situations, they are still so resilient. There is so much that we as developed countries can learn from them. This trip has caused me to re-think my consumption habits and ignited a love for the protection of our land,” she said.

Leah Serafini from Canada said she hopes for a meaningful agreement to be reached at COP17.

Time to leave arrogance at the door

“I wish people can leave their arrogance at the door and find effective ways to help people adapt to climate change. Communication channels need to be transparent so that even the people on the ground receive economic and social justice. We as youth want global equality! So that everyone can live a prosperous life, because climate change is threatening to affect the livelihoods of everyone.”

The MEC praised the youth for their inputs and dedication, saying that it’s important to learn from one another in leading to COP17.

“We know that the youth are faced with many challenges, but we appreciate your dedication and sacrifices. Although your journey has started because of COP17, it shouldn’t end here. Together we need to continue to reach out to rural and affected areas,” she said.