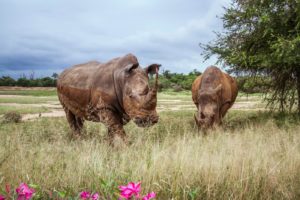 Last year 448 rhino deaths were recorded in South Africa – it was the highest number ever. With rhino poaching figures on the rise, will 2012 prove to deliver even higher digits?

Judging from January’s figures alone, if drastic measures to help curb rhino poaching are not put into place, this could very well be possible. The year 2012 is definitely not off to a good start for the rhino in South Africa with already 11 de-horned carcasses found in various parts of the Kruger National Park.

The recent upsurge in rhino killings has sent shock waves through the country, but now minister Edna Molewa is going to devote 150 game rangers to try and save the rhino from these brutal attacks.

In a bid to combat rhino poaching in South Africa, Environmental Affairs Minister Edna Molewa on Sunday said that an extra 150 rangers will be deployed in the Kruger National Park. This number will add to the already 500 rangers currently employed at the park.

Addressing a National Press Club briefing in Pretoria on Sunday, she said the ongoing poaching of the country’s rhino population is a great source of concern to the government. She added that her department would meet the Department of Public Works about re-erecting a 150km stretch of fence along the border with Mozambique.

“I had decided not to place a ‘blanket moratorium’ on hunting and hope that a draft memorandums of understanding on wildlife trafficking would be signed with both Vietnam and China,” she said.

Molewa’s announcement follows the killing of 11 rhinos since the beginning of the year. Two poachers have been killed and another two have been arrested in connection with the poaching in the Kruger National Park last week.

South African National Parks (SANparks) chief executive David Mabunda was also present at the briefing. He said if the fence was approved, it would cost an estimated R250-million to build.

“We still have a fence or what used to be a fence. That part of the fence is in a bad state of repair.”

The proposed fence would be electrified, but would not be so strong as to electrocute people who crossed the border. Mabunda said it would operate more as an early warning system.

He said most of those caught poaching were Mozambican nationals with some South Africans involved and very few Zimbabweans.

“We need an appropriate organised response,” he added.

South Africa has 22 000 rhinos left, which according to Mabunda is about 80 percent of the world’s rhino population.

Currently 22% of the country’s rhino population is in private hands. It was in fact growing. However, he warned that if poaching levels continued to climb, from 2015 South Africa could see a fall in its rhino population.

According to the latest rhino statistics, there are 4 838 black rhino left and the species is classified as “critically endangered”.

World Wide Fund for Nature (WWF) noted that although SA had increased its law enforcement efforts to curb rhino poaching, killing had however increased.

“It’s not enough to bust the little guy. Investigators need to shut down the kingpins organising these criminal operations. Governments in Africa and Asia must work together across borders to stop the illegal trade.”