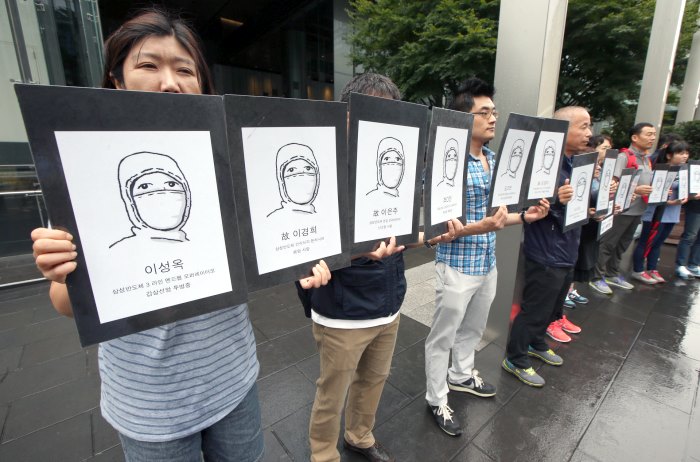 Most of the dead were in their 20s or 30s. One former worker—a breast cancer survivor—reported that Samsung brought in “uninformed kids” and treated them like they were “disposable cups.”

Samsung repeatedly refused to reveal the carcinogenic chemicals workers were exposed to in its factories, the exposure levels, or how it managed the chemicals. And the only reason it gave was protecting its bottom line: “our company’s competitiveness would be lowered,” it told the government, which then helped them keep it secret.

Samsung literally put profit ahead of workers’ lives. Tell it to compensate the sick workers and their families and improve safety measures so this never happens again.

There have been 200 cases of serious illnesses at Samsung’s LCD factories, including leukemia, lupus, lymphoma, and multiple sclerosis. There’s no question that Samsung tried to cover it up, and it had government help. The father of one worker who died of leukemia claims Samsung offered him 1 billion Korean ($914,000) to keep quiet.

Help to save lives with your vote

We’ve done it before. In 2013, hundreds of thousands of us joined a global call to demand garment companies pay a few pennies more per garment to make sure their workers weren’t dying. We all came together in huge ways—making calls, talking to local shops and not giving up. As a result, dozens of companies responded and agreed to our demands. With this kind of pressure on Samsung, we have a chance to make a difference to all the families of workers who died on the job, all the survivors denied compensation, and every new worker Samsung hires.

Women get 40% less than men

Samsung has been getting away with worker abuse for far too long — in part because it makes up one quarter of South Korea’s entire GDP. Just this week nearly 30,000 women Samsung workers walked off the job because they make 40% less than male employees for the same work. Production ground to a halt and Samsung’s stock plummeted more than 20% in a single day.

The time to take action is now.