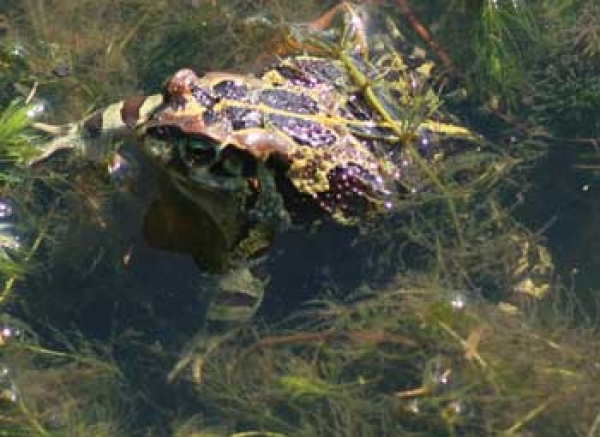 Watch out for the threatened Leopard Toad crossing wet roads at night!

Long ago the City’s southern suburbs consisted of many waterways – an ideal breeding ground for the Western Leopard Toad (Amietophrynus pantherinus). Then people moved in and erected walls around their properties, confining the frogs’ normal movement and breeding patterns. Folk in this region still know these slippery chap, especially during the month of August, when they breed. But do you know that they’re seriously threatened?

Living in compost heaps, drains and other damp areas of the urban garden, the toads spend much of their year feeding off all things from crickets to moths to worms. How do we recognize them? Elaborate leopard-type markings of chocolate brown patches on a bright yellow background. These markings are symmetrically paired, with a yellow stripe down the backbone. The toad’s forehead is a pink-brown to red colour, while when flipped over it displays a granular, creamy coloured throat.

We are now coming to the end of the dry summer season, when the toads remain dormant in gardens. This was when they build up their food reserves to prepare for the most taxing period of their year – the breeding season.

They breed between late July and early September, when each site is active for about two weeks. Toads face their biggest threat in this short period, as they hop across often busy roads to and from the water bodies at which they breed. As this happens at night, it is often difficult to spot the toads on wet, dark roads and many die under car wheels.

Since 2001, efforts have been made by local residents and nature conservation personnel to save the leopard toads from vehicles and generate awareness on the roads at night during the breeding season. However, this was not enough to save considerable numbers at all breeding sites. Serious coordinated action was needed to reverse the decline of the species, to prevent possible extinction.

In 2007, the Western Leopard Toad Conservation Committee was formed, gathering scientists, conservationists and representatives from various environmental departments of local, provincial and national government. The committee’s chief function is to merge ideas and scientific knowledge to ensure sound, factual information is circulated by the public and in the media. It also aims to oversee all activities surrounding the species – research, monitoring and volunteer work. Last year, they tried to achieve a drop in mortality rates of migrating toads and a rise in toadlet survival rates, by helping them across roads; and monitoring population numbers and breeding activity.

This year, a major campaign is being planned to achieve higher survival of breeding toads and toadlets, through heightened public awareness and large scale volunteer participation. Join the Toad Nuts (Noordhoek Unpaid Toad Savers) and help with night monitoring and data collection, which will happen in numerous areas throughout the southern Cape Town area. They hope to form at least one monitoring group per breeding site. Contact coordinator Mark Day to find out more about the breeding areas closest to you.

Residents could also make special holes along their perimeter walls for frogs and other wildlife to be able to migrate between gardens and help so them survive.